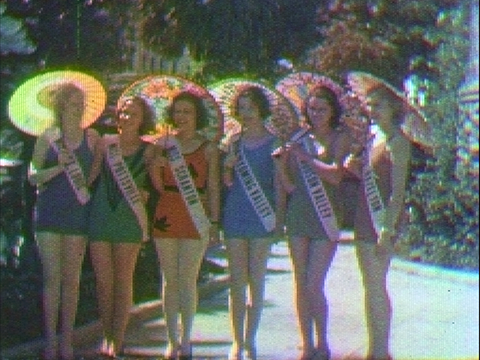 The earliest color film of Galveston’s Pageant of Pulchritude, and one of the oldest extant color films of Texas, is now viewable at TexasArchive.org. The Texas Archive of the Moving Image (TAMI) and the Rosenberg Library partnered to receive a National Film Preservation Foundation (NFPF) grant to restore the film, originally shot on a short-lived format called Kodacolor.

The film was discovered in 2016 when the Rosenberg Library submitted the home movies of prominent Galveston businessman George Sealy II to TAMI’s Texas Film Round-Up digitization program. Although this film appeared to be black and white, TAMI’s archivists realized upon inspection that it was shot on Kodacolor, an early, rare, color film stock produced by Eastman Kodak. George Eastman himself debuted the short-lived color process in a backyard party featuring prominent guests such as Thomas Edison and General John J. Pershing. 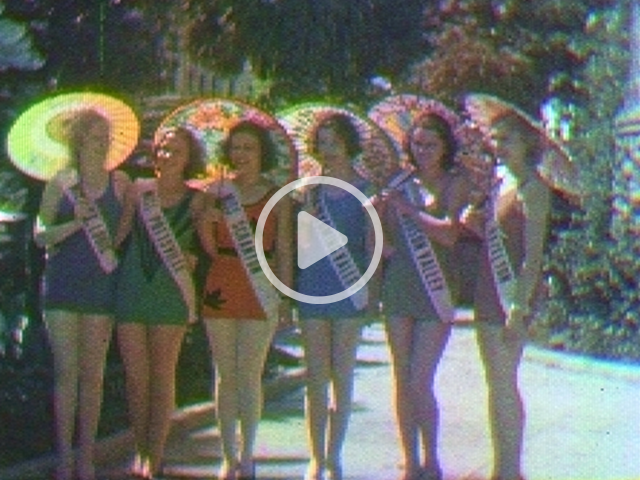 “When we began to transfer the film, we immediately spotted the unique visual pattern indicating that it was originally shot in Kodacolor,” stated TAMI Founder and Executive Director Caroline Frick. “Only in the last few years has a film laboratory been able to re-create the 1920s color process by digitally decoding the original red, yellow and blue information embedded in the celluloid. We are so proud of the TAMI-Rosenberg partnership as it well illustrates TAMI’s mission to assist organizations and individuals across the state with obsolete film and video.”

The film’s public debut aligns with the 100th anniversary of the International Pageant of Pulchritude, originally known as the Bathing Girl Revue. Held annually from 1920 to 1931, the Pageant of Pulchritude signaled the beginning of the summer tourist season in Galveston, attracting so many spectators that it tripled the island’s population.

“Although Rosenberg Library preserves an extensive archive of historic Galveston photos, there are relatively few examples of motion pictures in the collection, especially from this early period,” explained Museum Curator Eleanor Barton. “The restoration of this film has allowed the library staff to see how colorful the contestants’ wardrobes and accessories actually were. The personalities of these women are captured by film in a way that isn’t possible with still photography. They are laughing, posing and enjoying life on the island—it’s fun to watch them in action. We are so grateful to TAMI for bringing this film back to life!”

TAMI digitized additional films of Galveston from the Rosenberg Library as a part of its Texas Film Round-Up free digitization program that can be viewed here. The Film Round-Up has been presented by TAMI and the Office of the Governor's Texas Film Commission since 2008. Traveling to different locations each year, the program has resulted in the digitization of more than 38,000 films and videotapes from both individuals and organizations representing communities throughout the state. The collection dates as far back as 1910 and spans the decades of media technology, from 8mm and 16mm films to VHS, Digitbeta and MiniDV videotapes.

In addition, a comparison of the pre-restored and Kodacolor versions is available on TAMI’s YouTube channel.