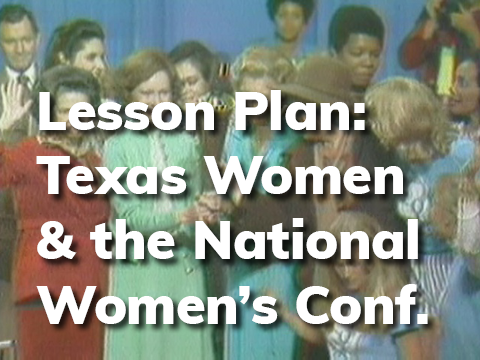 Through the use of a primary source video of the 1977 National Women’s Conference, students will see democratic principles in action and learn about important Texas and national women leaders and the political process. Students will evaluate different political arguments and articulate differing opinions on the Equal Rights Amendment. 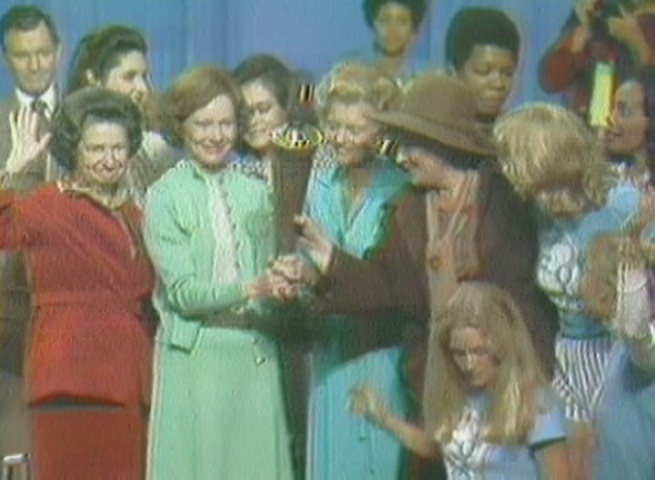 The following activity assumes students are aware of the women’s rights movement from the suffrage to the civil rights eras of the 20th century.

Students should have a basic understanding of the US Constitution, how conventions work, what delegates do, and how the Constitution is amended.

Students should understand the Bill of Rights, the 14th amendment’s “equal protection” guarantee for “all persons born or naturalized in the United States,” and the 19th amendment’s guarantee of voting rights for women.

Students should be familiar with significant women in the 20th and 21st centuries.

Have students bring in news clippings from the past 6 months regarding women and or women's issues.  Explain to students about bias and the need for trustworthy sources, and allow them to bring in either newspaper clippings or printed online new stories. Research can be done in class using the computer lab or outside of class.

Have each student summarize their news clipping for the class and then post it to a classroom bulletin board.

After hearing the article summaries, ask students to discuss some of the trends they have discovered regarding women in the news. What general themes or topics do they see? Are these issues new for women or have they always existed?

Divide the board into four columns.

Ask the students to name political leaders from the past or present, and write those in the first column on the board.

Ask students to name political leaders in Texas from the past or present, and write those names in the next column.

Ask students to name female politicians from the past and present, and write those in the third column.

Finally, ask students to name female politicians in or from Texas.

Ask the students if they notice any differences in the number of people named in each column.

Ask them why they think fewer women are elected to office than men “if women are over half of the population.”

Ask them what historical obstacles from the past prevented women from running for office.

Ask them what current obstacles may prevent women from running for office.

Use the Texas Women: Dilemmas for Women Seeking Elected Office Fact Sheet (see Worksheets) to enhance this discussion. Click on the source links to show different statistics regarding men and women officeholders. Ask the students about gender stereotyping dilemmas for women.

Ask the students to think about how far women have come. Ask them to think about historical achievements by women in the 20th and 21st centuries. Visit the Milestones for Women in Politics section of the Center for American Women and Politics website (https://cawp.rutgers.edu/facts/milestones-for-women) and scroll down the updated list to examine women’s key achievements.

Examine the number of women elected to office (state legislators, governor, or Congress) state by state by viewing the chart and playing with the drop down menu on the Center for American Women and Politics website ( https://cawp.rutgers.edu/facts/milestones-for-women)

Ask students if they have ever heard of the Equal Rights Amendment. Give them the following background on the ERA: In 1972, Congress sent the proposed Equal Rights Amendment (ERA) to the Constitution to the states for ratification. Originally drafted by Alice Paul in 1923, the amendment reads: "Equality of rights under the law shall not be denied or abridged by the United States or by any State on account of sex." Congress places a seven-year deadline on the ratification process, and although the deadline extends until 1982, the amendment does not receive enough state ratification. It is still not part of the U.S. Constitution.

Ask the students how many states must ratify an amendment. The answer is 38.

Distribute worksheets. Show students the below clips from “The National Women’s Conference 1977.” At times, pause the video to help students better understand questions from the corresponding worksheet.

Lesson plan “How Long Must We Wait for Liberty? The Equal Rights Amendment,” from the Reform, Reformers, and Reformatories Summer Institute, 2009
http://www.usd116.org/ProfDev/AHTC/lessons/SteffenSI09/Steffen09.htm

The Center for American Women and Politics “Firsts for Women in Politics” timeline and “Current Number of Women Office Holders"
https://cawp.rutgers.edu/facts/milestones-for-women

Social Studies Grade 7
7A - The student understands how individuals, events, and issues shaped the history of Texas during the 20th and early 21st centuries
7C - Describe and compare the impact of the Progressive and other reform movements in Texas in the 19th and 20th centuries such as the Populists, women's suffrage, agrarian groups, labor unions, and the Evangelical movement of the late 20th century
7D - Describe and compare the civil rights and equal rights movements of various groups in Texas in the 20th century and identify key leaders in these movements, including James L. Farmer Jr., Hector P. Garcia, Oveta Culp Hobby, Lyndon B. Johnson, the League of United Latin American Citizens (LULAC), Jane McCallum, Lulu Bell Madison White, and others
7F - Analyze the political, economic, and social impact of major events in the latter half of the 20th and early 21st centuries such as major conflicts, the emergence of a two-party system, political and economic controversies, immigration, and migration
11C - Analyze the effects of the changing population distribution and growth in Texas during the 20th and 21st centuries and the additional need for education, health care, and transportation; and describe the structure of the population of Texas using demographic concepts such as growth rate and age distribution
18A  - The student understands the importance of effective leadership in a democratic society identify the leadership qualities of elected and appointed leaders of Texas, past and present, including Texans who have been President of the United States
18B - Identify the contributions of Texas leaders, including Lawrence Sullivan "Sul" Ross, John Nance Garner "Cactus Jack", James A. Baker III, Henry B. González, Kay Bailey Hutchison, Barbara Jordan, Raymond L. Telles, Sam Rayburn, and Raul A. Gonzalez Jr.
19B - Describe how people from various racial, ethnic, and religious groups attempt to maintain their cultural heritage while adapting to the larger Texas culture
21A - Differentiate between, locate, and use valid primary and secondary sources such as computer software, databases, media and news services, biographies, interviews, and artifacts to acquire information about Texas
21D - Identify points of view from the historical context surrounding an event and the frame of reference that influenced the participants
21E - Support a point of view on a social studies issue or event
21F - Identify bias in written, oral, and visual material; use standard grammar, spelling, sentence structure, punctuation, and proper citation of sources