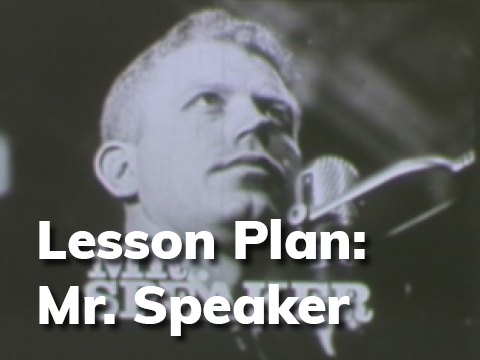 Texas' state government was formed by elected officials upon its annexation to the United States in 1845.  At that time, a state constitution was drafted, laying the foundation for our present system and establishing the structure and function of the government for the State of Texas. The Constitution of the State of Texas established the executive, legislative, and judicial branches and provided for a separation of powers, similar to the Constitution of the United States. However, the responsibilities of state government and the unique make-up and history of Texas resulted in provisions that are unique to the state, such as expanded protections to local governments.

This lesson plan asks students to examine the functions of state government, as well as the duties, responsibilities, and powers of state office holders. Students will be expected to combine an analysis of archival footage of state political activity with outside research into the current structures and functions of the government of the State of Texas. Focusing on films that were created to communicate the workings of state government to the public, as well as political ads, archival news footage, and other films, students will gain a greater understanding of the historic actions and the participants within state government. In both the lesson and extended learning sections, students will conduct outside research to determine the current composition of Texas government and will be expected to think critically about the differences between the modern political system in Texas and how the system operated in the past. 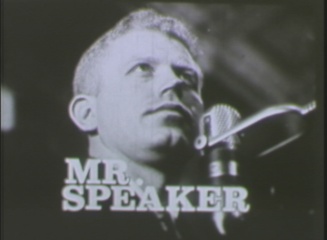 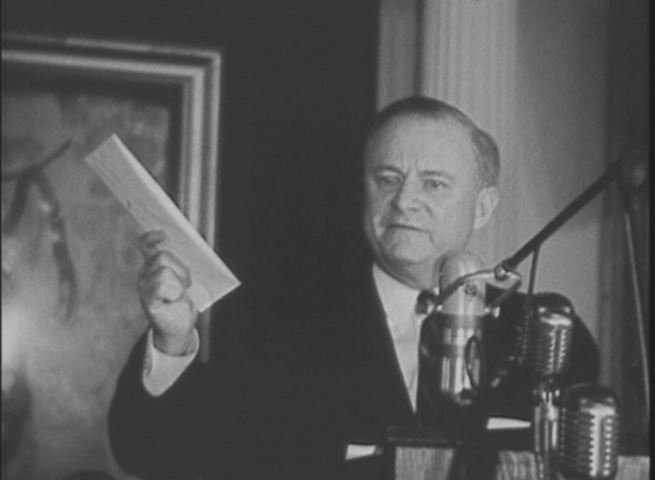 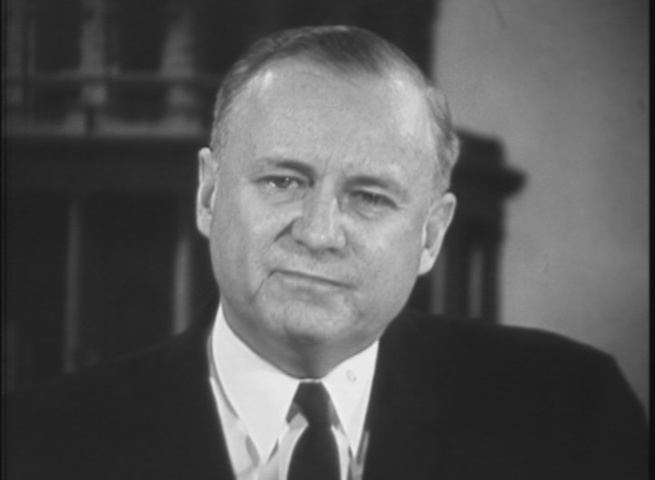 Paid Political Telecast for the Reelection of Governor Price Daniel (1962) 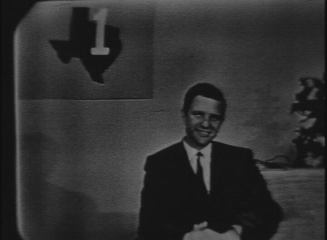 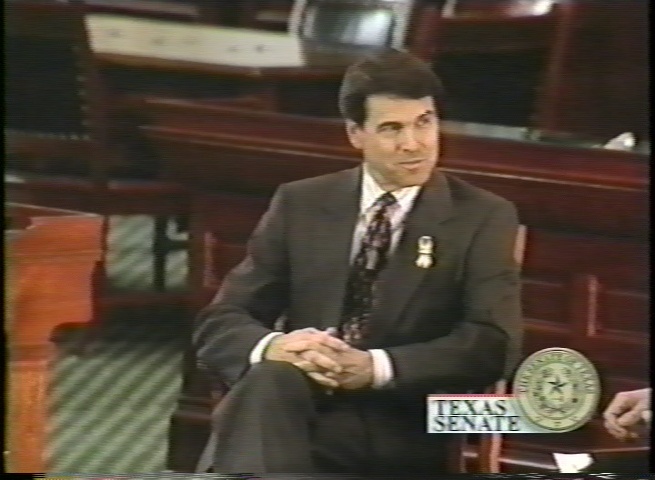 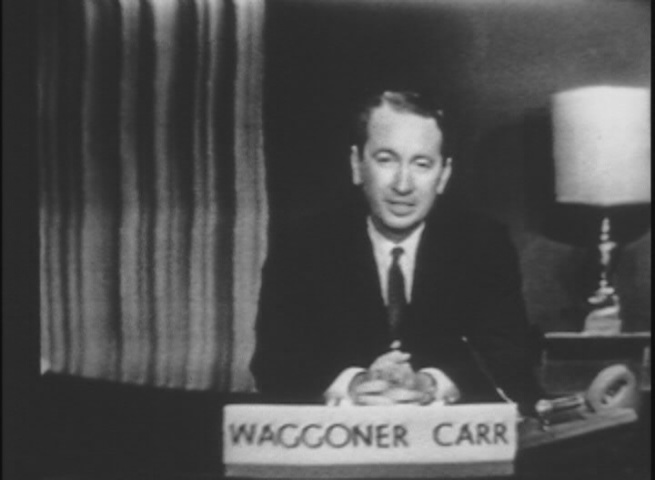 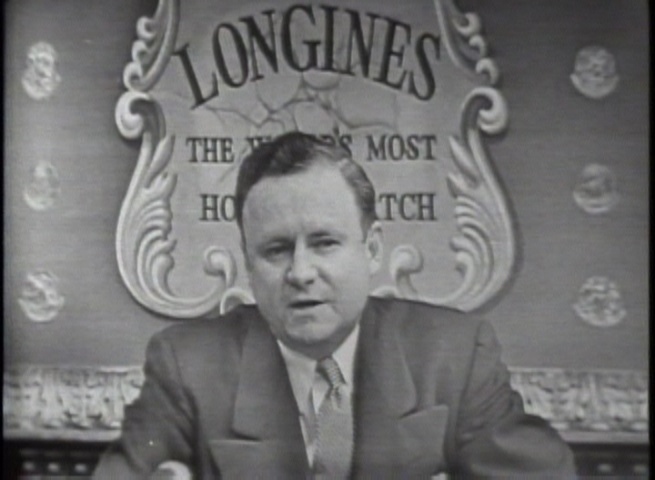 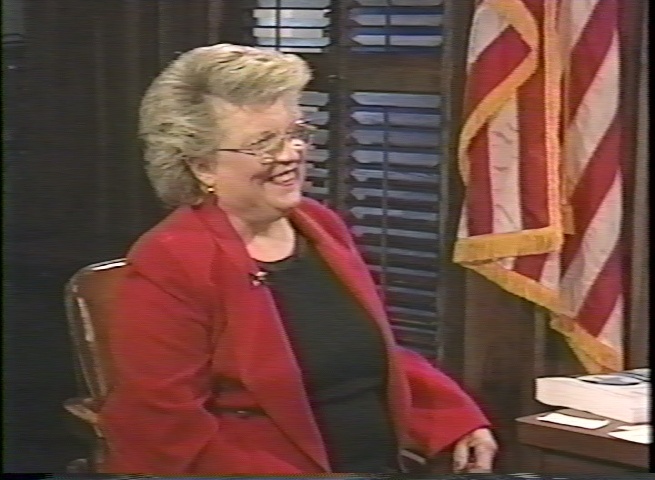 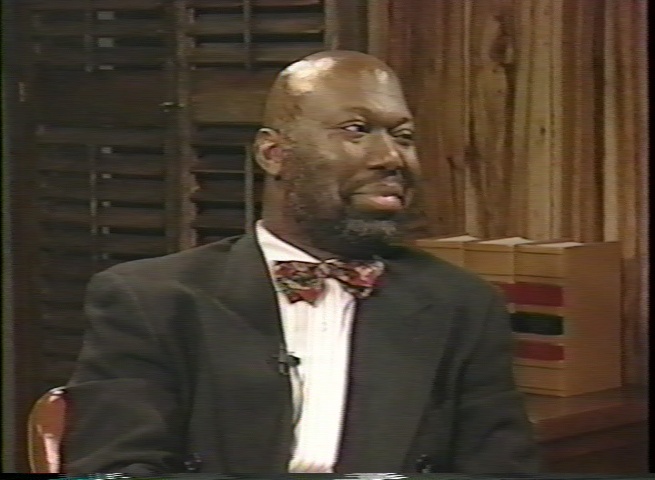 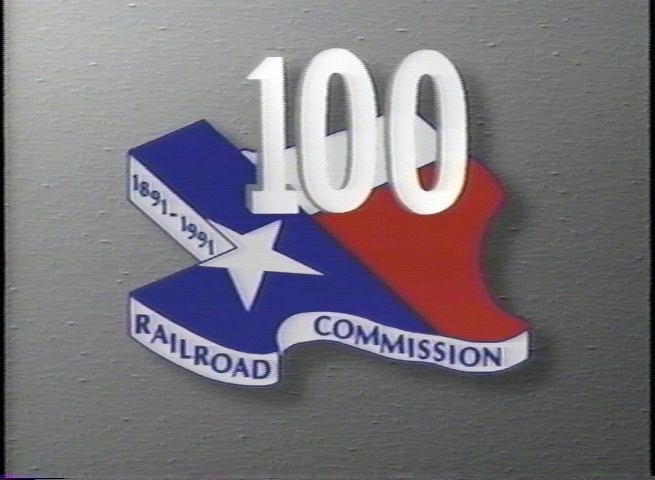 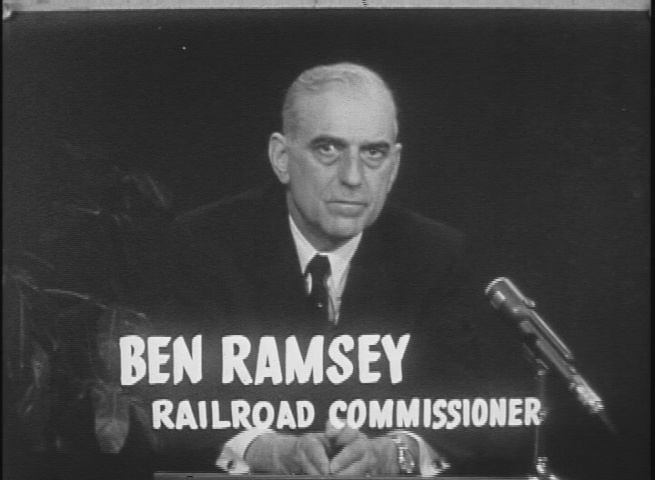 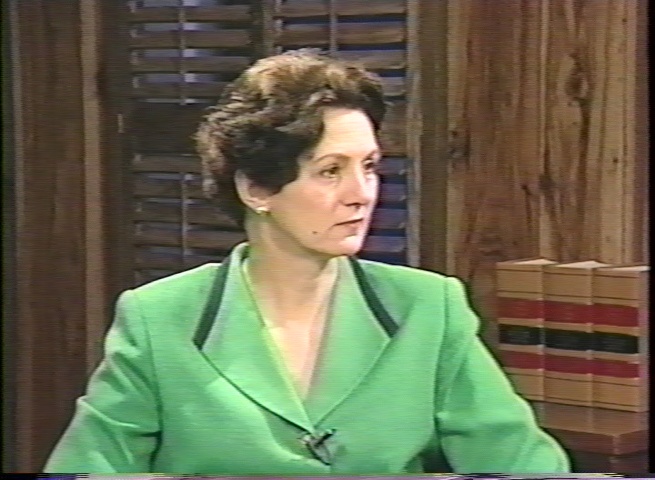 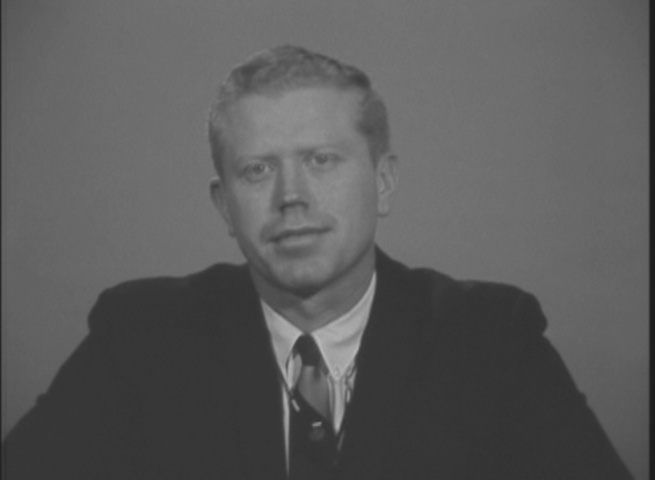 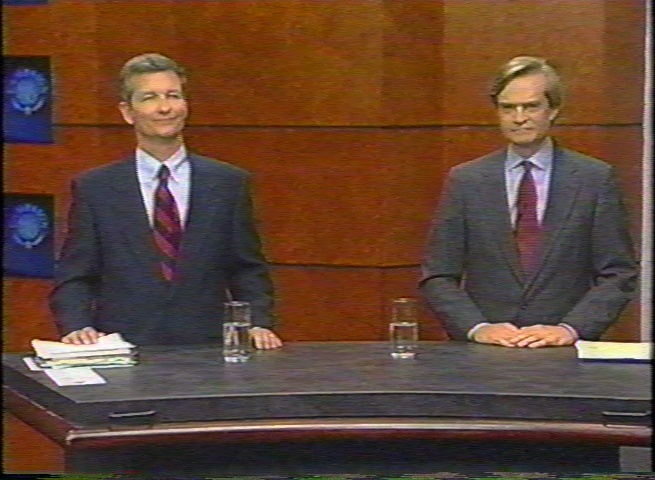 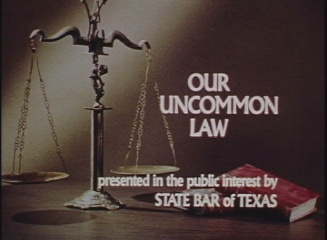 The following lesson assumes that students:

Explain to students that you will be discussing the government of the State of Texas.

Draw three squares on the board, on an overhead, or on a large sheet of paper. Label these squares “Executive,” “Legislative,” and “Judicial.”

Brainstorm with students what offices at the state level fit into each of the boxes. Ask them if they know the names of people who currently hold any of these offices.

Students can either call out answers or write their ideas on paper that is collected. At this point you can make suggestions, such as telling them that the executive branch is usually led by individual officeholders or giving them the names of current office holders.

When you have gathered the students’ ideas, write them in the correct box on the board or overhead.

Tell your students that they will be watching a video focusing on a typical day for the Speaker of the House during the Texas legislative session in 1965. This video should give them an idea of the work that the members of the state legislature undertake and the roles of the participants in state government. Instruct students that, as they watch the video, they should be thinking about the similarities and differences of the state legislature today and that which the video depicts.

Hand out a worksheet with questions over the video (see Worksheets). This worksheet will highlight some of the key areas mentioned in the video, as well as require critical thinking at the end where students must analyze what they have seen and draw conclusions based on the information.

Show students the video ‘Mr. Speaker,’ which follows Speaker of the House, Ben Barnes, for a day during the 59th Legislative Session. Have students complete the worksheet as they watch the video.

After the video is completed, students should conduct research using the Legislative Reference Library of Texas (https://lrl.texas.gov/index.cfm) to complete the worksheet questions related to the current composition of state government.

When students have completed their worksheets, ask if they were surprised by the composition of the state legislature in the 1960s? Do students feel that the current makeup of today’s legislature well represents the people of Texas?

Depending on the size of your classroom and your available resources, break students into groups or let students work independently.
Assign students or groups to a particular position in government in the State of Texas. Students will be responsible for researching the position and presenting on the roles and responsibilities of that position, the current office holder, requirements/qualifications needed to hold office, terms of office, what key issues that this position has addressed, how to contact or petition the office, and any interesting facts about their subject. Students may use the worksheet in the worksheet tab to compile their information. Research sources for each of these positions is outlined in the ‘Resources' tab.
After all students have completed their work, group each position under the appropriate branch of government and discuss any checks and balances between branches that are evident in the listed responsibilities. Depending on your space availability, you can create this listing of all branches (with their associated positions) can create this digitally through an overhead slide, Google Slides/PowerPoint presentation, a Prezi, or you can have each group be responsible for a section of a paper ‘Branches of Texas Government' diagram on a classroom wall or chalkboard/whiteboard.
Executive
Texas has a plural executive branch with several positions overseeing the functions of state government.
• Governor
• Lieutenant Governor
• Attorney General
• Comptroller of Public Accounts
• Land Commissioner
• Railroad Commissioner
• Agriculture Commissioner
Legislative
Considered the most powerful body in the State of Texas, the state legislature has financial control over the activities of state government.
• State Senator
• State Representative
Judicial
Established by Article 5 of the Constitution of the State of Texas, the Judicial branch of Texas is unusually complicated with many distinct court systems with overlapping jurisdictions.
• Justice of the Supreme Court of Texas
• Justice of the Court of Criminal Appeals
• Justice of the Court of Appeals
• District Court Judge
• Probate Court Judge
• Justice of the Peace
General Information about State Government

State of Texas Law Library
The Texas State Law Library serves the legal research needs of the Texas Supreme Court, the Court of Criminal Appeals, the Office of the Attorney General, other state agencies and commissions, and the citizens of the state. This website serves as a reference for the state Constitution, administrative rules, and statutes.
https://www.sll.texas.gov/law-legislation/texas/constitution/

Governor
Office of the Governor of Texas (official website)
https://gov.texas.gov/

Paid Political Telecast for the Reelection of Governor Price Daniel, 1962
Daniel rebuts his detractors and campaign opponents while touting his successful leadership on a number of issues, including improvements to public schools and institutions of higher education, raising of teachers' salaries, establishment of industrial attraction program to bring new industry to Texas, highway construction and road improvement, implementation of highway safety program, and improved senior and health benefits.
https://www.texasarchive.org/2008_00395

Don Yarborough Political Telecast (1968)
Yarborough lays out his proposed education policies, including insuring more of Texas’ students to attend college, increasing the value of education by attracting high quality teachers and professors to work in Texas from other states, and raising professor salaries.
https://www.texasarchive.org/2011_03669

The Ron and Joanna Clark Collection - Austin Update with Ron Clark and Rick Perry (1999)
Austin Update, a broadcast initiative by the Texas House of Representatives Video and Audio Services, features interviews with various members of the Texas government. In this segment, State Representative Ron Clark speaks with Lieutenant Governor Rick Perry. Perry discusses the powers given to lieutenant governor, which exceed those of the same position in other states.
https://www.texasarchive.org/2017_03622

The Man from Gober (1962)
In the campaign film The Man from Gober, Speaker Turman promises to "preserve the God-given personal and political liberties of all citizens" if elected Lieutenant Governor.
https://www.texasarchive.org/2006_00035

Waggoner Carr Political Telecast for Attorney General (1960)
On the eve of the 1960 election, Waggoner Carr stresses the power held by the people on election day and decries the "wasted term" of incumbent Will Wilson.
https://texasarchive.org/2012_04230

Longines Chronoscope With Price Daniel (1952)
Attorney General Daniel discusses his ongoing campaign for the U.S. Senate, his battle against organized crime in Texas, and his involvement in the controversial Supreme Court ruling in the Tidelands Controversy.
https://www.texasarchive.org/2013_02599

The Ron and Joanna Clark Collection - Austin Update with Ron Clark and Michael Williams (1999)
State Representative Ron Clark speaks with Railroad Commissioner Michael Williams. Williams discusses the roles and responsibilities of the Texas Railroad Commission, which has little to do with railroads and everything to do with oil and gas. He explains regulatory reform, technology modernization, and environmental protection.
https://www.texasarchive.org/2017_03621

The Ron and Joanna Clark Collection - Austin Update with Ron Clark and Susan Combs (1999)
Combs begins by discussing the relevance of the Department of Agriculture, which encompasses numerous sectors of everyday life. She then describes various outreach programs aimed at promoting Texas agriculture, such as the Go Texan campaign. She outlines various goals to boost sales revenue and jobs within the state.
https://www.texasarchive.org/2017_03623

The Ron and Joanna Clark Collection - State Representative Candidate Debate (1996)
Throughout the debate, Sanders and Clark discuss their positions on campaign finance reform, the prevention of juvenile crime, tort/judicial reform, education, and tax relief. However, the majority of the debate involves both candidates criticizing each other for campaign spending and contributions.
https://www.texasarchive.org/2017_03618

Our Uncommon Law (1971)
Through a brief commentary on trials in the past, an explanation of contemporary law, and a glance at a–staged–trial, this film provides basic information for the public.
https://www.texasarchive.org/2010_00705