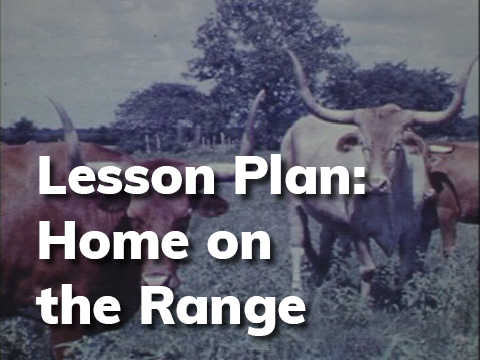 Using prior knowledge and archival footage, students will analyze the impact of the cattle industry in Texas, specifically focusing on cattle drives and the role of the cowboy. Students will discuss the conditions on cattle drives, evaluate the daily activities cowboys, assess technologies that were invented to aid ranchers, and the role of the Texas Rangers in the protecting the cattle industry. 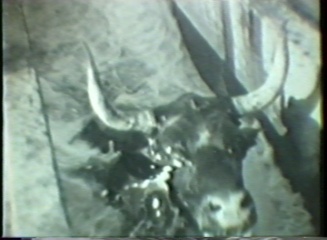 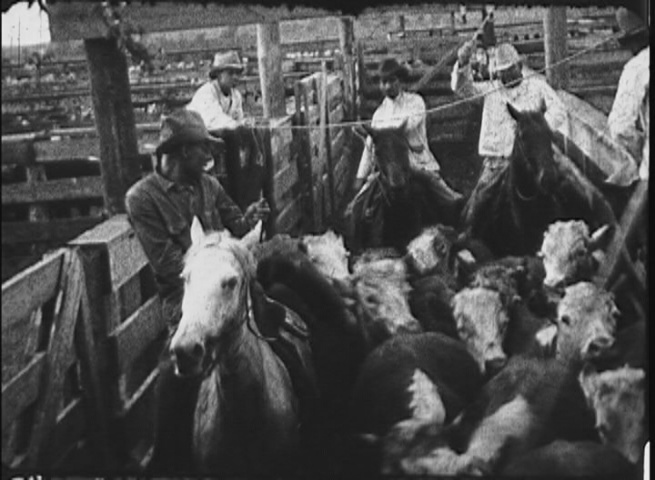 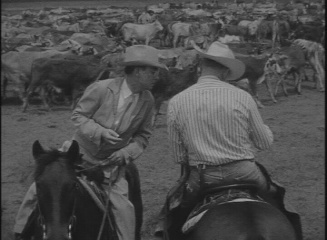 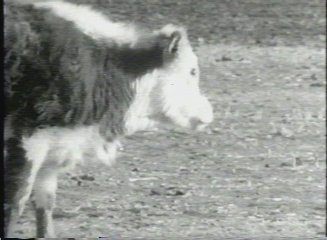 Texas - Troubled Times in the Southwest 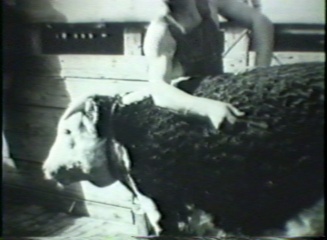 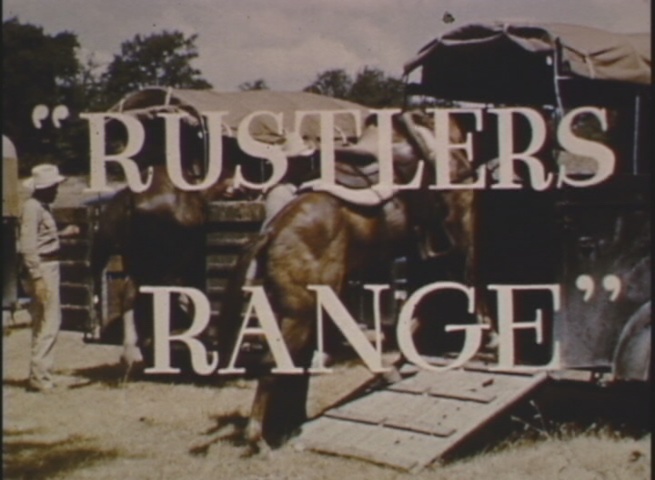 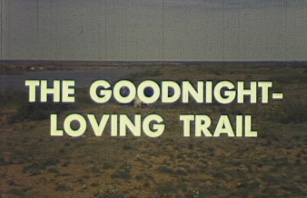 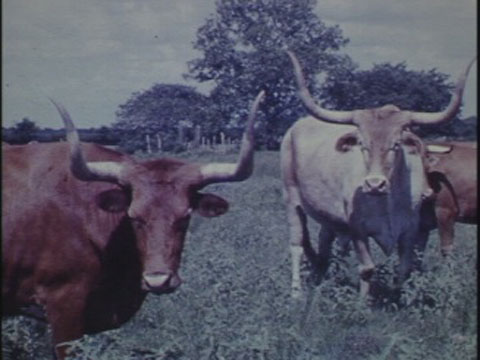 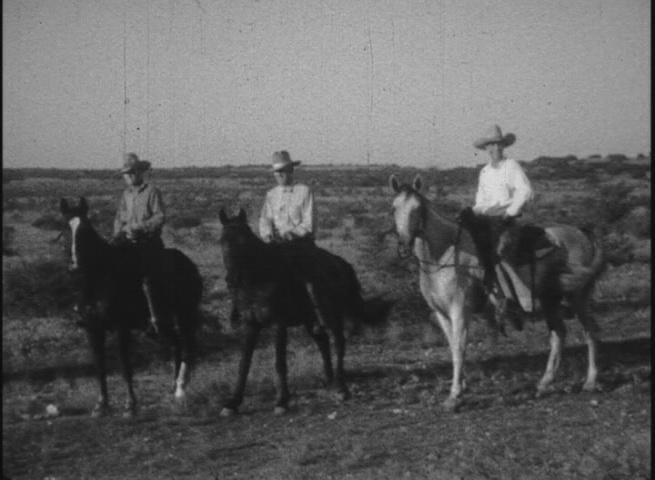 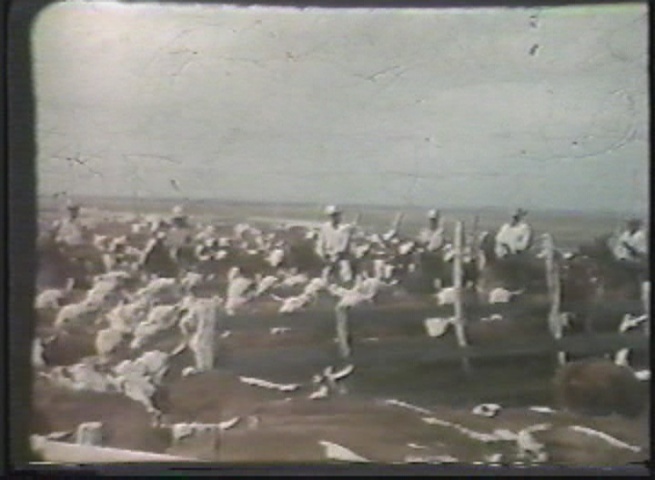 Workin’ from Can’t to Can’t:  African-American Cowboys in Texas 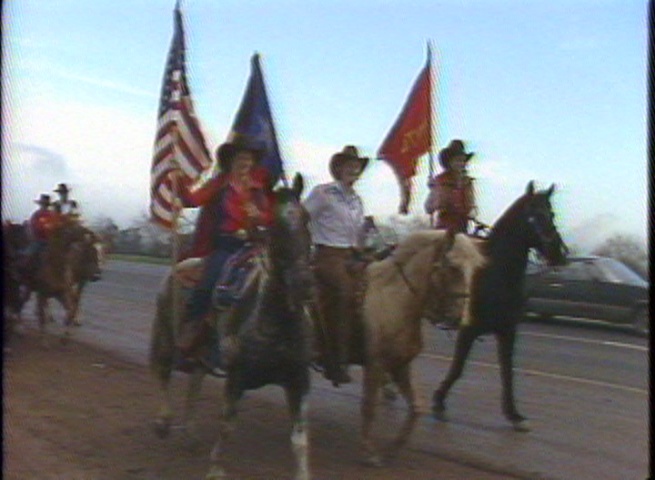 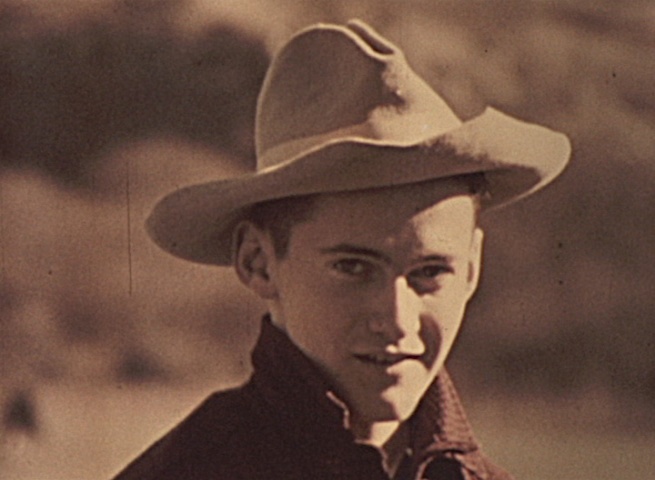 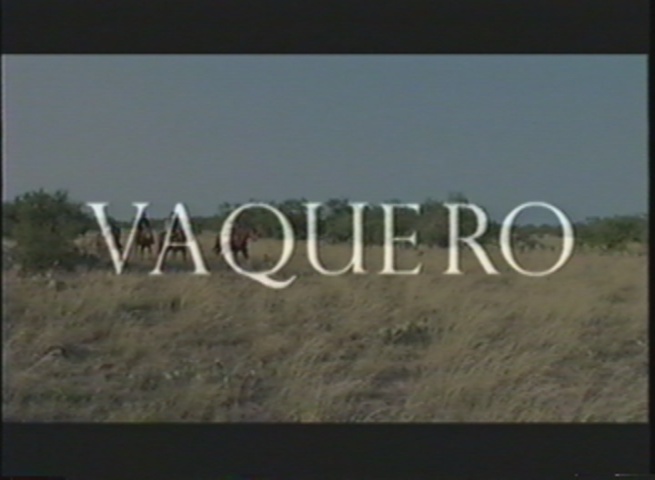 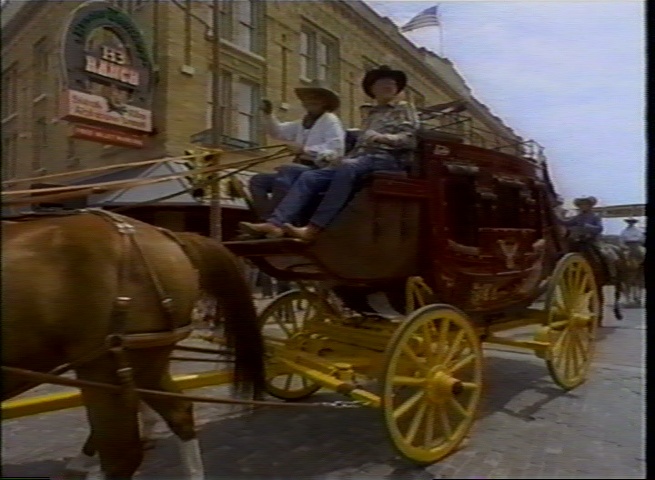 Wall Street of the West:  The Story of the Fort Worth Stockyards

Students should have a working knowledge of late 19th century Texas history, including the economy of Texas, the concept of the open range, and the changes brought about by the railroad or the oil industry.

Students should possess background knowledge on the basics of cattle ranching; this is not intended to be an introductory lesson.

Group students in pairs and give each group a legal-size sheet of white paper; instruct them to divide the paper in two.

Ask the students to brainstorm the changes that occurred in Texas industry and society as a result of the arrival of the railroad or the discovery of Spindletop on the left side of their paper.

When students have completed their brainstorm, ask each group to share one of their answers and record it on the board. Encourage students to ask questions or discuss the answers; they can also add shared answers to their individual brainstorms.

Ask students to brainstorm the changes that occurred in Texas industry and society as a result of the development, and resulting boom, of the cattle industry on the right side of their paper.

After they have finished brainstorming their ideas, have them share one of their answers that you will record on the board. Encourage students to ask questions or discuss the answers; have them add shared answers to their brainstorm.

Working with the paper in front of them, have students circle similarities between the two sides in one color, differences in another.

Have each group select the three most important similarities and differences of the impacts of the railroad or oil industry and cattle ranching in Texas.

Give each student a copy of a map of the United States. Have them use their books or the Internet to label the following trails:

Ask students to discuss with their partner why they think the trails were located where they were. Discuss as a class.

Show students the films listed below. Have them write on the back of their map the conditions on the trails, any problems cowboys and ranchers had to deal with while moving cattle, and the benefits of raising and selling cattle.

Working with their partners, have students add any additional condition, problems, or benefits that they know about from previous class work. Have students share and discuss their answers with the group.

Using their prior knowledge from class work, the text book, class discussion, and the archival footage, have students create a diary entry about life on the cattle trail or on an active ranch. Diary entries should include at least 10 specific facts from the information discussed in class, should address both the positives and negatives, and should only include items or events from the relevant time period. Students could choose from any of the following characters:

To demonstrate their understanding of the ranching industry, students will use the attached “Cowboy Caricature”(https://www.texasarchive.org/devtami/sites/default/files/cowboy.pdf) instructions to create a drawn caricature of a cowboy.

Show students examples of caricatures online; explain to them that the caricature they draw should have many pictures to represent the ideas they are trying to express. Make sure they understand the following:

Give groups of 3-4 students a large sheet of butcher block to create their caricature.

Make sure the students have access to their notes, textbooks, the internet, and any sources necessary to research what they will be drawing.

If necessary, ask students to briefly explain their pictures on the back of the caricature OR when students have completed their caricatures, have them present the caricature to the class, discussing their specific symbols and decisions in the drawing of the cowboy.

Using the film, “The Goodnight-Loving Trail – Changes to Cattle Trails,” have students discuss the changes that occur to a trail based on technological innovations. The film highlights road safety through focusing on the path created by the Goodnight-Loving Trail; although the film, in its entirety, may not be beneficial to the ranching lesson, the visual of the changes that occurred to an original trail should be as it allows for discussion regarding the changes brought about by technological innovation.

Bailey, Jack. A Texas Cowboy’s Journal: Up the Trail to Kansas in 1868. ed. David Dary. Norman: University of Oklahoma Press, 2006.

Worksheet “Cowboy Caricature” - Home on the Range - Grades 4 to 8

4B - Explain the growth, development, and impact of the cattle and oil industries including contributions made by Charles Goodnight, Richard King, and Lizzie Johnson

9A - Describe ways people have adapted to and modified their environment in Texas, past and present, such as timber clearing, agricultural production, wetlands drainage, energy production, and construction of dams

9B - Identify reasons why people have adapted and modified their environment in Texas, past and present, such as the use of natural resources to meet basic needs, facilitate transportation, and enhance recreational activities

9C - Compare the positive and negative consequences of human modification of the environment in Texas, past and present, both government and private, such as economic development and the impact on habitats and wildlife as well as air and water quality

20A - Identify famous inventors and scientists such as Gail Borden, Joseph Glidden, Michael Debakey, and Millie Hughes-Fulford and their contributions

20B - Describe how scientific discoveries and innovations such as in aerospace, agriculture, energy, and technology have benefited individuals, businesses, and society in Texas

21A - Differentiate between, locate, and use valid primary and secondary sources such as computer software; interviews; biographies; oral, print, and visual material; documents and artifacts to acquire information about the United States and Texas

23B - Use a decision-making process to identify a situation that requires a decision, gather information, identify options, predict consequences, and take action to implement a decision

7A - Describe a variety of regions in the United States such as political, population, and economic regions that result from patterns of human activity

7D - Locate on a map important physical features such as the Rocky Mountains, Mississippi River, and Great Plains

8B - Explain the geographic factors that influence patterns of settlement and the distribution of population in the United States, past and present

9A - Describe how and why people have adapted to and modified their environment in the United States, past and present, such as the use of human resources to meet basic needs

9B - Analyze the positive and negative consequences of human modification of the environment in the United States, past and present

13A - Compare how people in different parts of the United States earn a living, past and present

23B - Identify how scientific discoveries, technological innovations, and the rapid growth of technology industries have advanced the economic development of the United States, including the transcontinental railroad and the space program

24A - Differentiate between, locate, and use valid primary and secondary sources such as computer software; interviews; biographies; oral, print, and visual material; documents; and artifacts to acquire information about the United States

4D - Identify and locate major physical and human geographic features such as landforms, water bodies, and urban centers of various places and regions

7B - Identify and analyze ways people have modified the physical environment such as mining, irrigation, and transportation infrastructure

8A - Describe ways in which the factors of production (natural resources, labor, capital, and entrepreneurs) influence the economies of various contemporary societies

6B - Identify significant individuals, events, and issues from Reconstruction through the beginning of the 20th century, including the development of the cattle industry from its Spanish beginnings, the myth and realities of the cowboy way of life

6D - Explain the political, economic, and social impact of the agricultural industry and the development of West Texas resulting from the close of the frontier

7B - Define and trace the impact of "boom and bust" cycles of leading Texas industries throughout the 20th and early 21st centuries, including cattle ranching such as farming, oil and gas production, cotton, ranching, real estate, banking, and computer technology

20C - Analyze the effects of various scientific discoveries and technological innovations, such as barbed wire, the windmill, and oil, gas, and aerospace industries on the developments of Texas

21A - Differentiate between, locate, and use valid primary and secondary sources such as computer software, databases, media and news services, biographies, interviews, and artifacts to acquire information about Texas

11A - Analyze how physical characteristics of the environment influenced population distribution, settlement patterns, and economic activities in the United States during the 17th, 18th, and 19th centuries

12A - Identify economic differences among different regions of the United States

12D - Analyze the causes and effects of economic differences among different regions of the United States at selected times in U.S. history

14A - Explain why a free enterprise system of economics developed in the new nation, including minimal government intrusion, taxation, and property rights

27B - Analyze the impact of transportation and communication systems on the growth, development, and urbanization of the United States

27C - Analyze how technological innovations changed the way goods were manufactured and marketed, nationally and internationally

28A - Compare the effects of scientific discoveries and technological innovations that have influenced daily life in different periods in U.S. history