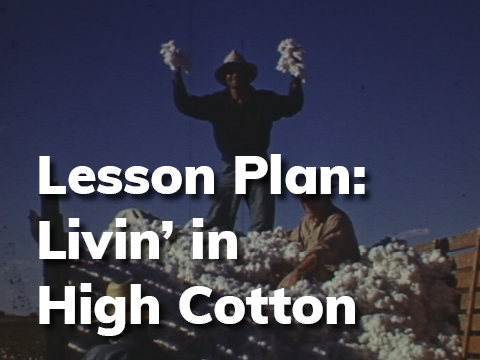 Through the use of primary source video, students will develop an understanding of cotton farming in Texas and the technological innovations that led to Texas' flourishing cotton industry. 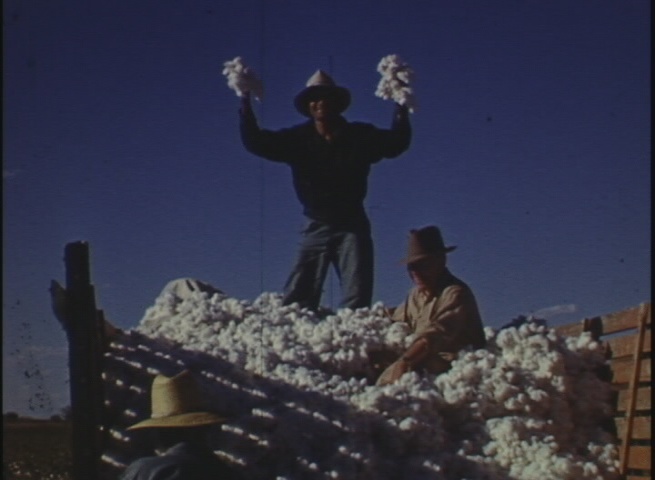 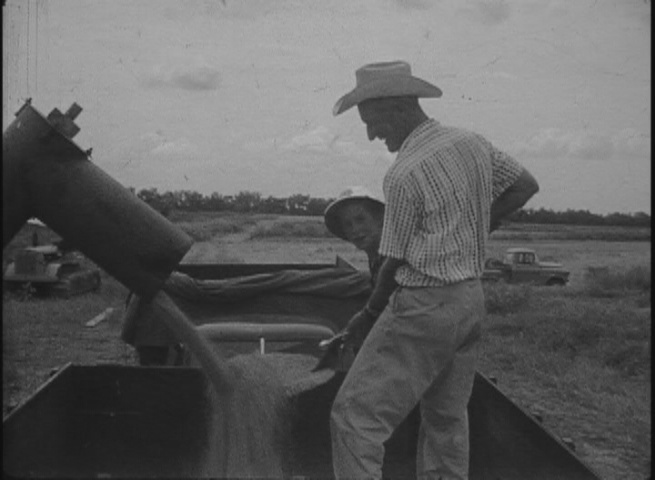 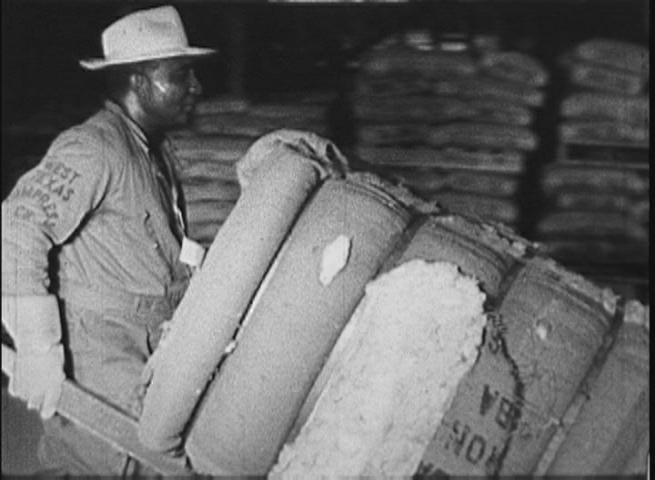 This lesson assumes students are familiar with cotton as a staple necessary for fabric production.

Students have a basic understanding of the following terms: cotton boll, cotton gin, and cotton lint.

Take a poll of the number of students in the room wearing jeans.

As a class, list other materials (non-clothing) made of cotton that they might encounter on a daily basis.  What items would be difficult to do without?  Are any surprising? (Items to discuss include various types of clothing, netting, paper, bookbinding, sheets, tents, money, towels, cooking oil, baseballs, etc).

Although cotton came to Texas with Spanish missionaries, it emerged as the “king” of Texas crops in the late 1880s and has continued to be the number one crop in the state. Technological innovations played a large role in cotton’s rise of importance in the Texas economy. Share this information with the class to prepare them to watch four videos relating to this theme.

The first video, The Ernest M. Hunt Family Film Collection, no. 8 - Rancho Feliz (1943), https://texasarchive.org/2010_02124, comes from right across the Texas border in New Mexico. This film was made right around the time farmers were switching to mechanical cotton pickers, but in this film, cotton is being picked by hand. While watching the video, discuss what you are seeing:

Create a list as a class, or individually, of the resources being used to collect cotton.

The next video, The Jim W. Keeland Collection, no. 7 - Texas Crop Harvests (1956), https://texasarchive.org/2011_02275 shows the harvest of cotton using a mechanical picker in Southeast Texas. While watching the video, discuss what you are seeing:

Continue your list of resources being used to collect cotton.

Discuss how those resources differed from the last film.

The first two videos show how cotton picking changed in 20th century Texas. Prepare the class for the next film by hypothesizing other changes that might have made the cotton industry flourish in Texas. Questions to start discussion:

Watch the segment of the last film, The Underwood Family Collection, no. 1 - West Texas Compress and Warehouse Company, https://texasarchive.org/2009_02796. This film shows a cotton compress in the Panhandle/West Texas region where bales of cotton are being pressed and weighed after ginning (the area where the majority of Texas cotton is now produced). While watching the video, discuss:

Assignment: Students should research and write a paragraph about each of the 3 innovations (the cotton picker, the cotton compress and the cotton gin) featured in the films. They should find the date it was invented and how the technology would have changed the process of cotton production. Students should include a final paragraph describing an industry related to cotton’s life after it has been grown, harvested and compressed.

Although Texas is the top cotton producer in the nation, it is only one of many crops grown in the state.

Ask students to research another crop that is grown in Texas and create a poster presentation for the class.  Students can choose from corn, wheat, hay, sorghum, peanuts, rice, soybeans, oats, sunflower, potatoes, beans, and sugarcane.  The poster could include the following:

“A Look at Texas Agriculture”, National Organization Agriculture in the Classroom
https://www.agclassroom.org/student/