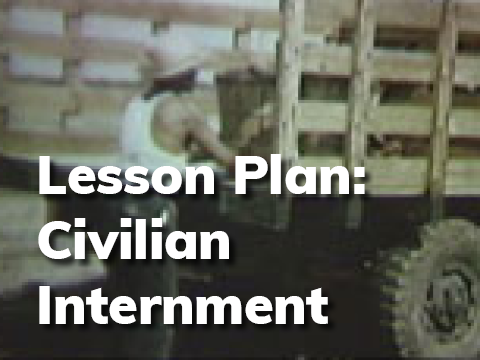 Through the use of primary sources, students will analyze the use of propaganda and bias to shape the way the American public viewed the interment of German and Japanese citizens in the Crystal City Detention Facility. Students will also evaluate the removed rights of these citizens and determine if the government was justified in its actions.

The following activity assumes that students are aware of the causes of WWII, and the alignment of countries between the Allied and Axis powers

Students should also be aware of the conflict between preserving the rights of the individual versus maintaining the safety of the public good.

Students should have a working knowledge of human rights and the privileges of citizenship.

Students should also have some background knowledge of bias and propaganda.

Ask several students to volunteer their interpretations of the meanings of each poster or to explain what the government is trying to accomplish with each.

Ask a student volunteer to explain why the poster is offensive and degrading for Jews, or explain the meaning of the cartoon if the student’s knowledge of Jewish stereotypes is limited.

Ask students why the Nazis wanted to portray Jews in this way. What was the Nazis’ motivation behind the propaganda? (Students may write their responses or share via discussion).

Have students share their answers and explain that the Nazi regime used images like this to elicit a negative reaction towards Jews.

If students are still having trouble understanding this concept, explain that propaganda is biased information an individual or group presents to influence its audience.

Explain that today they will be watching a film made by the United States government during WWII that also uses propaganda to influence the public’s opinion. In this case, the government is trying to convince the public that a discriminatory public policy is a fair treatment of US citizens.

Hook B - What is an American?

Ask students: “What makes someone an American?” Have them write down words or phrases that define an American on their paper. Remind them there is no right or wrong answer. They don’t have to use complete sentences.

Take a minute of silence, and let students examine the board and absorb their classmates’ opinions.

If people are comfortable sharing their responses, ask why students responded the way they did.

Explain that students responded differently because of personal experiences, which shape their bias about what it means to be American. A student who is a fourth or fifth generation immigrant may have a much different response than a first or second generation immigrant.

Remind students that there are many different ways a person can be considered “American,” but there have been times in our country when those definitions have been restrained by the government under the guise of helping the “greater good.”

Today they will examine the internment of American citizens in a time of war, and identify how the government used its bias in trying to help the “greater good” by intruding on the rights of certain individuals.

Explain that though the government believed they were doing what was “right” in their eyes (which presents a bias), they tried to impose their bias on others using the following film as a source of propaganda.

Have students look up and define the following words (or do so as a class):

Students will watch the video Alien Enemy Detention Facility, Crystal City, Texas, https://texasarchive.org/2006_00010, in five sections, which can be accessed using the Educator Links listed under the video player.

Have students use a T-chart with one side labeled “Propaganda” and one side labeled “Reality.” After each segment, stop the video and have students list the aspects of the segment that made life in Crystal City seem positive, but how in reality the camp deprived American citizens of their human and civil rights.

On the back of the T-Chart, have students briefly list the rights of the interned citizens that were violated.

Once students have been given time to think about responses, discuss possible answers as a class. If students could not think of an answer on their own, have them write down one of the responses shared in class, or add new responses to their own.

Divide the students into groups of four. Have each group answer one of the following questions. When groups have answered the question, designate a presenter from each group to share their group’s response.

Ask students if they think the United States government was justified in interning citizens in order to protect the nation against its enemies. Did their actions against a small group of citizens benefit the "greater good" of the nation? Does their use of propaganda indicate that they knew they were doing something wrong?

Propaganda is still widely used today to influence public opinion. Sometimes propaganda is used to incite hate (as with the Nazi posters), and sometimes it is used to make a policy or organization seem more positive than it is (as with the Crystal City film). Pick a social issue from the list below, and find a piece of propaganda related to the conflict. You may find an image, video clip, or sound clip. Once you have found an example of propaganda, answer the following questions in a written paragraph:

Slavery in the United States

The “red scare” in the United States

Immigration of Central and South Americans to the United States

The War on Terror

Have students read the following articles:

“Walkout in Crystal City”
Portrayal of Crystal City as an area with a reputation for social injustice (with both the internment camp and the Latino civil rights movement)
https://labloga.blogspot.com/2009/01/walkout-in-crystal-city.html

Students will then compare the three different experiences of the following: German and Japanese interned citizens during WWII, Jews interned in NAZI concentration camps, and Latino students at Crystal City in the 1960s-70s.

How are their experiences similar or different?

What rights were denied to all three groups?

Who was the governing body that denied those rights?

Why were the students able to take a stand, but the prisoners were not?

How did the circumstances (time period, social issues, etc.) affect each group differently?

How does each situation portray the role of the government? (state, federal, and NAZI)

How is Crystal City a symbol of social inequality?

How is Crystal City a symbol of social progress?

With students divided into groups of 4-5, use butcher paper and markers to trace the outline of one group member’s body.

Draw a line vertically down the center of the outline.

Label one side “Alien Internment” and the other side “Latino Civil Rights;” label the outside space around the body “Holocaust”

Students should show the physical, environmental, and political differences (and similarities) between the three groups.

Suggestions for teaching propaganda in the classroom
http://www.classroomtools.com/prop.htm

US History Studies Since 1877

7D - Analyze major issues of World War II, including the Holocaust; the internment of German,

Italian, and Japanese Americans and Executive Order 9066; and the development of conventional and atomic weapons

19B - Explain constitutional issues raised by federal government policy changes during times of significant events, including World War I, the Great Depression, World War II, the 1960s, and 9/11

29E - Evaluate the validity of a source based on language, corroboration with other sources, and information about the author, including points of view, frames of reference, and historical context

29D - Evaluate the validity of a source based on language, corroboration with other sources, and information about the author

15A - Identify and give examples of different points of view that influence the development of public policies and decision-making processes on local, state, national, and international levels

15B - Explain how citizenship practices, public policies, and decision making may be influenced by cultural beliefs, including nationalism and patriotism

17A - Evaluate a U.S. government policy or court decision that has affected a particular racial, ethnic, or religious group such as the Civil Rights Act of 1964 and the U.S. Supreme Court cases of Hernandez v. Texas and Grutter v. Bollinger

7A - identify reasons for U.S. involvement in World War II, including Italian, German, and Japanese dictatorships and their aggression, especially the attack on Pearl Harbor

7D - Analyze major issues of World War II, including the Holocaust; the internment of German, Italian, and Japanese Americans and Executive Order 9066; and the development of conventional and atomic weapons

7E - Analyze major military events of World War II, including the Battle of Midway, the U.S. military advancement through the Pacific Islands, the Bataan Death March, the invasion of Normandy, fighting the war on multiple fronts, and the liberation of concentration camps

29D - Use the process of historical inquiry to research, interpret, and use multiple types of sources of evidence