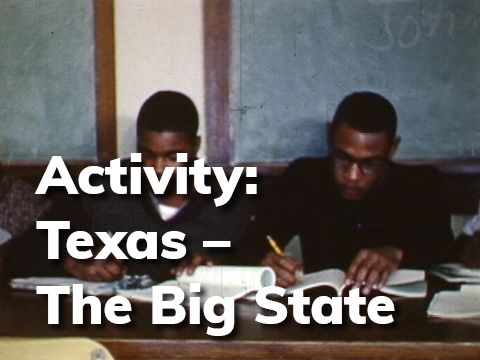 Take a trip across Texas with the 1952 film, Texas – The Big State. This activity familiarizes students with the geography of the state as well as important landmarks and industries of the mid-20th century Texas after the post-WWII economic boom period.  The "Before the Film" worksheet has students map the locations featured in the film.   The "During the Film" worksheet can be completed by students while watching the film or segments of the film.  The "After the Film" discussion questions and writing prompts ask students to reflect on the film and compare the 1950s to present day Texas. 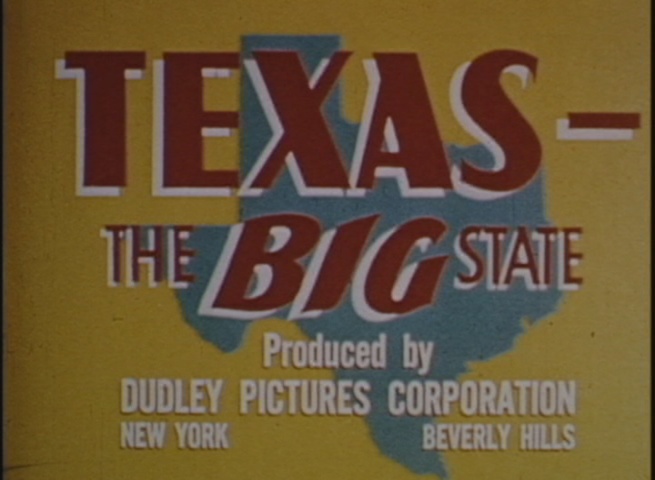 Assign students one of the cities mentioned in the film: Amarillo, Austin, Beaumont, Borger, Cleburne, Dallas, El Paso, Fort Worth, Galveston, Houston, Lubbock, Rio Grande, San Angelo, San Antonio, Temple, or Waco. Ask them to research the cities current top industries and landmarks and report back to the class comparing current information to that reported in "Texas – The Big State." Students could create an oral or visual presentation or even a video to convey their findings

Grade 4
5A - Identify the impact of various issues and events on life in Texas such as urbanization, increased use of oil and gas, the Great Depression, the Dust Bowl, and World War II
5B - Explain the development and impact of the oil and gas industry upon industrialization and urbanization in Texas, including important places and people such as Spindletop and Pattillo Higgins
12A - Explain how people in different regions of Texas earn their living, past and present, through a subsistence economy and providing goods and services
12B - Explain how geographic factors such as climate, transportation, and natural resources have influenced the location of economic activities in Texas
12E - Explain how developments in transportation and communication have influenced economic activities in Texas
12F - Explain the impact of American ideas about progress and equality of opportunity on the economic development and growth of Texas
16A - Explain the meaning of various patriotic symbols and landmarks of Texas, including the six flags that flew over Texas, the San Jacinto Monument, the Alamo, and various missions
21E - Use appropriate mathematical skills to interpret social studies information such as maps and graphs
20C - Predict how future scientific discoveries and technological innovations might affect life in Texas
22E - Use standard grammar, spelling, sentence structure, and punctuation
Social Studies Grade 7
7A - Explain the political, economic, and social impact of the oil industry on the industrialization of Texas
8B - Analyze and interpret geographic distributions and patterns in Texas during the 19th, 20th, and 21st centuries
11C - Analyze the effects of the changing population distribution and growth in Texas during the 20th and 21st centuries and the additional need for education, health care, and transportation
12A - Explain economic factors that led to the urbanization of Texas
12B - Trace the development of major industries that contributed to the urbanization of Texas such as transportation, oil and gas, and manufacturing
12C - Explain the changes in the types of jobs and occupations that have resulted from the urbanization of Texas
20A - Compare types and uses of technology, past and present
20C - Analyze the effects of various scientific discoveries and technological innovations on the development of Texas such as advancements in the agricultural, energy, medical, computer, and aerospace industries
21A - Differentiate between, locate, and use valid primary and secondary sources such as computer software, databases, media and news services, biographies, interviews, and artifacts to acquire information about Texas
21H - Use appropriate mathematical skills to interpret social studies information such as maps and graphs
22A - Use social studies terminology correctly

After the Film Discussion Questions / Prompts