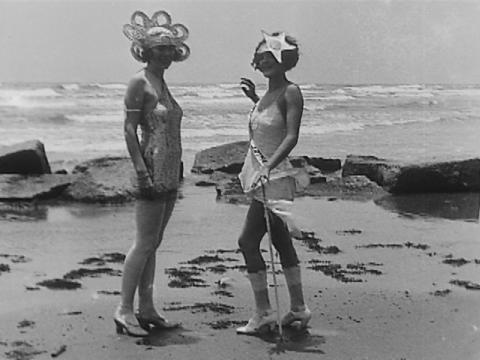 The Sloane Collection: From Nitrate to Digital

The Texas Archive of the Moving Image (TAMI) is excited to announce the launch of The Sloane Collection, nineteen nitrate films contributed to TAMI by Houston's Story Sloane, III and brought back to life through the assistance of the National Film Preservation Foundation and the Texas Film Round-Up. Amongst these rare images is the earliest existing footage of Houston, a 1915 Shriners parade through downtown. Other films include footage of the 1925 Galveston Revue, the famous German-Houstonian zookeeper Hans Nagel taming a zebra, Cuero's first Turkey Trot, the "company town" of Freeport, and the workings of Houston businesses such as the Houston Post, American Maid Flour, and Anderson, Clayton and Company.

These rare nitrate films came to TAMI as 35mm negatives from Houston gallery owner and photographer Story Sloane as a part of the Texas Film Round-Up free digitization program. Very few nitrate films, especially non-feature materials, still exist from the 1910s and 1920s due to neglect, deterioration, and the medium's combustible nature. Although the films were almost 100 years old and little was known about their origins, they were in overall fair condition and included unique footage of the Texas coastal region. TAMI received a grant from the National Film Preservation Foundation to preserve the films by creating new polyester prints. Shriners International also contributed to the project to assist in the preservation of the 1915 and 1925 films of Shriners parades. The preservation project resulted in the creation of new negatives for preservation purposes, 35mm prints for projection, and digital files for easy access.

We are thrilled that these unique documents of Texas's past are now available at texasarchive.org for viewing and sharing.  Catch a screening of one of the new prints during the next Sprocket Society on December 9th at the Alamo Drafthouse at the Ritz in Austin.

The Sloane Collection, no. 8 - The Freeport Harbor

The Sloane Collection, no. 12 - Anderson Clayton

The Sloane Collection, no. 2 - Shriners Parade on Main Street, Houston, 1925