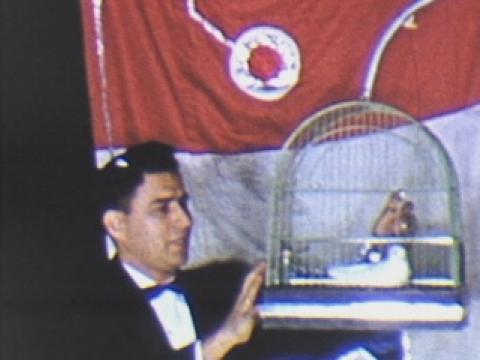 Calling Texas home since 1922, Ramon Galindo has been a lifelong contributor to the state's vibrant and evolving character. Galindo and his wife Pauline Santos opened up a tailoring shop in downtown Austin in the immediate post-war period, establishing themselves as fixtures in the community.  His shop had an impressive array of clientele ranging from the UT-Austin cheerleading squad to LBJ.

Variety was not limited to his client list, alone. A true renaissance man, Galindo is also an accomplished magician and a talented filmmaker. In 2009, Galindo was honored Texas Association of Magicians' most distinguished member, in large part, for taking the time to capture, catalog and preserve video footage of important magic performances. Galindo's personal film library is an amazing resource, and TAMI is fortunate to have been able to digitize many of Galindo's remarkable films. Additionally, TAMI, in conjunction with the Sprocket Society at the Alamo Ritz, will be screening Galindo's spooky and zippy short film, "A Day of Horror" on Sunday, October 14th at 1:45 PM. The gripping 16mm film was shot just outside of San Marcos in a since demolished home and features refreshingly natural performances from Galindo's daughter and several of her friends.

As alluded to earlier, Galindo has been recognized by TAOM for making great strides in preserving the achievements of the magic community in Texas. Applying that same watchful ardor to the Texas landscape, Galindo has been critical to preserving the growth and the continued development of the Lone Star State. Just as "A Day of Horror" captures a rambling, distinctly Texas home prior to its destruction, Galindo's compiled video footage of Texas landmarks showcases gorgeous shots of certain local hallmarks, like the Capitol Theater, which unfortunately no longer stands.

Within the Ramon Galindo Collection, the video compilation which most embodies Galindo's spiritedness and zest for life is clip number fifteen, "Sideshows, Circuses, and Parades." Highlights include an unflinching depiction of some particularly daring body performers, footage of some carefree waterskiing on Lady Bird Lake captured with an impossibly steady hand, and an infectiously alive parade through downtown Austin which culminates with a procession by a motley crew of magicians. This playful selection of footage serves as a great segue-way into a deeply personal and creative project like "A Day of Horror."

Take a moment to immerse yourself in Galindo's work. We hope to see you Sunday October 14th at the Alamo Ritz for the Sprocket Society's 1:45PM screening of Galindo's "A Day of Horror."

Tickets can be purchased at www.drafthouse.org.

The Ramon Galindo Collection, no. 15 - Sideshows, Circuses and Parades