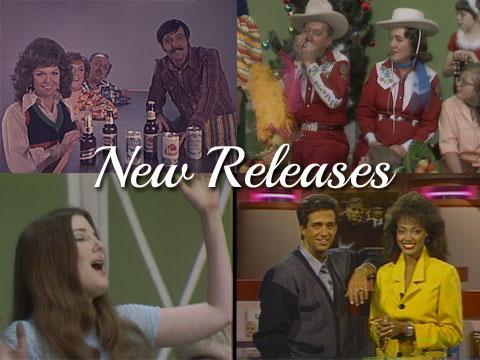 Rather than highlight a single collection, this month's New Releases showcases a trio of archival finds you do not want to miss.

On the air in Houston for nearly 30 years, Don Mahoney and Jeanna Clare with Their Kiddie Troupers was a weekly local television program showcasing musical performances by local children. In this 1970 episode, hosts Mahoney and Clare welcome actress Annette O'Toole back to the "ranch." O'Toole, a Houston native, made her first television appearance as a guest on the program at the age of two. After chatting with Mahoney about working in Hollywood, she sings Jimmy Webb's "Didn't We." Did you or someone you know ever perform on Don Mahoney? Let us know!

Fans of the 1978 Holiday Race for Space will already know just how entertaining a product marketing film made by the Dallas-based Bill Stokes Associates can be. This 1973 production for Pearl Beer is no exception, using musical numbers to spice up an otherwise dry presentation of sales improvement programs. A quartet of players performs a variety of upbeat, original songs about the Pearl brand and ways to boost returns. The film also pitches a nostalgic advertising campaign featuring Judge Roy Bean. Established in 1883, the Pearl Brewing Company was based in San Antonio and distributed across the state. It was acquired by Pabst Brewing Company in 1977.

The Video Store, later known as Inside Video Today, was a weekly local television program broadcast on WFAA-TV in Dallas. Created by executive producer Allan Lord in response to the rising home video industry, the series highlighted the best and latest movie titles available to rent or buy at the neighborhood video store. In this 1988 episode, anchors Paula McClure and Bill Evans preview new video releases, offer potential "sleepers," and suggest genre favorites. Throughout, the program marvels at the benefits of home viewing and the newfound practice of film collecting.