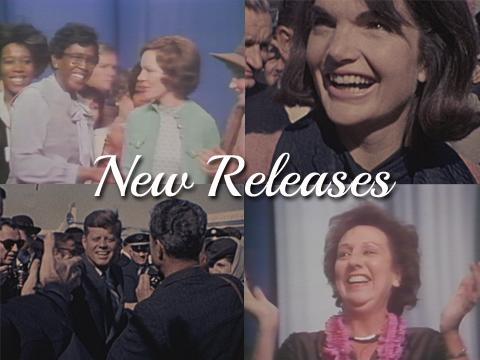 November marks the anniversary of two extraordinary events in both Texas and United States history. In this month's New Releases, the Texas Archive of the Moving Image travels back in time to revisit these moments like never before.

November 22, 1963, 11:39 a.m.: Air Force One touches down at Dallas Love Field. President John F. Kennedy was in Texas for a two-day, five-city tour building early support for his 1964 reelection campaign. First Lady Jacqueline Kennedy accompanied her husband, with Vice President Lyndon B. Johnson, Texas Governor John Connally, and Senator Ralph Yarborough leading the welcoming party. After visits to San Antonio, Houston, and Fort Worth the previous day, the presidential party headed to Dallas. Kennedy was scheduled to speak at a luncheon there before moving on to Austin for a reception at the Governor's Mansion. On the morning of November 22, Air Force One made the 13-minute flight from Carswell Air Force Base to Love Field. After disembarking, the President and First Lady shook hands with members of the welcoming crowd. TAMI donor Mary Jo Hoover was among that crowd. This home movie captures the arrival of Air Force One and Air Force Two at Love Field and Hoover's brief encounter with President and First Lady Kennedy before the couple joined Governor Connally and his wife, Nellie, in an open-top limousine. After departing Love Field, the presidential motorcade planned to drive a ten-mile route through downtown Dallas. Kennedy was fatally shot as he passed through Dealey Plaza at 12:30 p.m., less than an hour after touching down in Dallas.

The relevant segment begins at 02:07.

November 18 to 21, 1977: Houston hosts the first and only federally funded National Women's Conference. Over the course of three days, some 2,000 delegates representing all 56 states and territories debated and voted on a series of resolutions that aspired to eliminate barriers to women's equality. The resulting National Plan of Action was submitted to President Jimmy Carter and the United States Congress in March 1978. In this 1978 television special, actress Jean Stapleton reflects on her experience at the conference. Stapleton, best known for her role of Edith Bunker on All in the Family, was a member of the national commission that organized the event. Beyond providing a general review of the conference and its agenda, the film also highlights the next priority for the women's movement—primarily, the approval of the Equal Rights Amendment.

For more footage related to both events, visit TAMI's curated collection, For It to Have Happened in Texas…, and its web exhibit, Women on the Move: Texas and the Fight for Women's Rights.