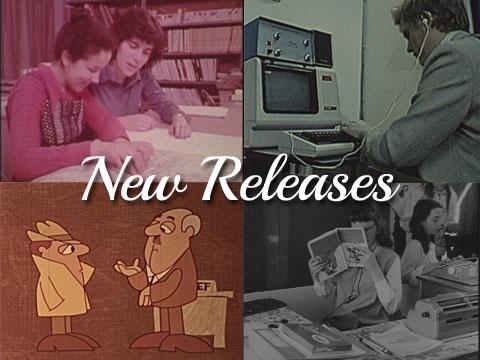 This month, the Texas Archive of the Moving Image is pleased to present a series of educational films from the Texas School for the Blind and Visually Impaired. The collection not only highlights the educational programs offered to students with disabilities but also addresses subjects such as employment and dehumanization.

Produced by the American Foundation for the Blind, "No Two Alike" gives as quick lesson on the resources available to students who are blind or visually impaired, such as teacher consultants, itinerant teachers, resource rooms, and individualized education programs. The Education for All Handicapped Children Act of 1975 required public schools to provide children with physical or mental disabilities equal access to education.

"Visions of Texas" illustrates how equal opportunity is a matter of employment as well as education. Produced in 1959 by the Radio and Television Department at the University of Texas at Austin, this educational film stresses the importance of vocational rehabilitation by describing the different jobs held by persons with visual handicaps across the state.

Unlike most of the films in the collection, "What Do You Do When You See a Blind Person?" speaks directly to people with sight. Presented by the American Foundation for the Blind, the 1971 film challenges certain fears and stereotypes and demonstrates how to assist those who are blind or visually impaired in an appropriate and respectful manner.

Established by the Texas Legislature in 1856, the Texas School for the Blind and Visually Impaired is a special public school that provides specialized instruction to students with visual impairments. While its Austin campus only accommodates about 150 full-time residents, the school serves hundreds of children and adolescents every year through short-term study programs.

Watch other films from the collection here.