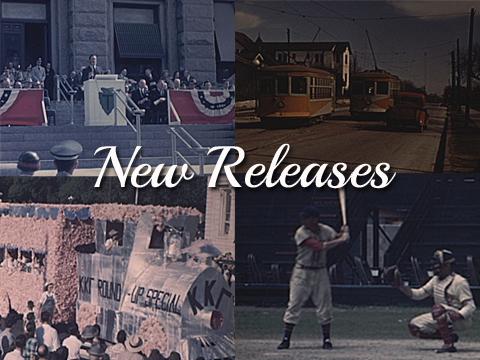 To close out 2017, this month's New Releases looks back at three bygone Austin phenomena. The featured films come from the Henry Kuempel Collection, donated to TAMI by the Austin History Center.

In 19th-century Austin, public transit consisted of mule-powered streetcars. The Austin City Railroad Company began operations in 1875. Sixteen years later, the city shifted to electric cars, eventually boasting 23 miles of track throughout central Austin. Persistent financial troubles and the introduction of bus routes ultimately doomed the streetcar system. Austin fully transitioned from streetcars to buses in 1940. Within two years, all of the rails had been removed and donated as scrap metal for use in World War II. In this home movie, Kuempel documents the final run of the Congress Avenue streetcars on February 7, 1940.

When it began in 1930, Round Up was the capstone of the University of Texas at Austin spring homecoming season. The annual parade—featuring elaborately decorated floats and waving beauty queens—attracted students, alumni, and locals alike. As this footage of the 1948 parade illustrates, however, Round Up also developed a history of racial intolerance. Protests following the 1990 event compelled the University's alumni organization to discontinue its support. Round Up has since evolved to primarily consist of fraternity parties and recruitment functions.

The Austin Pioneers was one of the eight original teams that formed the Big State League, a Class B minor league baseball circuit featuring clubs exclusively based in Texas. Ed Knebel, the proprietor of the 7-Up Bottling Company, owned the club. He also financed the construction of Disch Field, the team's home park. The Pioneers played from 1947 to 1955, after which Knebel sold the franchise to James D. Connolly and Associates. The group subsequently brought the Texas League to Austin with a revived Austin Senators team. In this home movie, dating from the late 1940s or early 1950s, Kuempel captures Pioneers players at baseball practice at Disch Field.