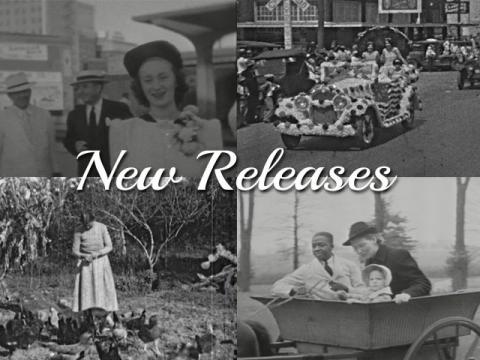 The Texas Archive of the Moving Image is thrilled to present not one but TWO notable home movie collections dating back to the 1920s.

The Fuentes Collection came to TAMI from Texas A&M Corpus Christi and represents some of the earliest films produced by a Mexican-American filmmaker about the Mexican-American community in Texas. Antonio Rodríguez Fuentes was born and raised on his family's ranch near Montemorelos, Nuevo León, Mexico. He moved to Laredo as a young man, eventually taking up residence in Corpus Christi in the 1910s. He married Josefine Barrera, a Corpus Christi native, in 1918.

A proficient photographer, Antonio shot several home movies using a rare 9.5 mm French-made Pathex camera. While most of the home movies capture simple moments with his family—such as this one of his son learning to ride a tricycle—others document 1920s Corpus Christi. This home movie shows the Fourth of July celebration through downtown in 1929.

The Yount-Manion Films were discovered by Greg Riley and Fred McKinley while the pair was researching their 2005 book, Black Gold to Bluegrass: From the Oil Fields of Texas to Spindletop Farm of Kentucky. They are now housed for long-term preservation at Lamar University in Beaumont. Family patriarch Miles Frank Yount, known as the "Godfather of Beaumont," was an oilman and civic leader. His Yount-Lee Oil Company was responsible for numerous oil booms, including the second Spindletop boom, and eventually sold to Stanolind Oil for over $41 million in 1935 (the third-largest cash transaction in American business history).

A few of the films in the collection document Yount's business interests. This early industrial film, for example, features 1920s footage of Beaumont oil fields, such as Spindletop. Scenes from the Refinery of the Magnolia Petroleum Company and the South Texas State Fair Grounds are also included.

A majority of the Yount-Manion Films, however, are home movies. Mildred Frank Yount-Manion—Miles' daughter—features prominently, with the films following her through adolescence and early adulthood. In this 1939 home movie, members of the Yount-Manion family say their goodbyes to Mildred and her infant daughter, Kathryn, at the Santa Fe Depot in Beaumont. Mildred was traveling to her mother's estate in Lexington, Kentucky, due to concerns of potential attacks on Southeast Texas during World War II.

Check back for more films from the Yount-Manion Collection coming soon!