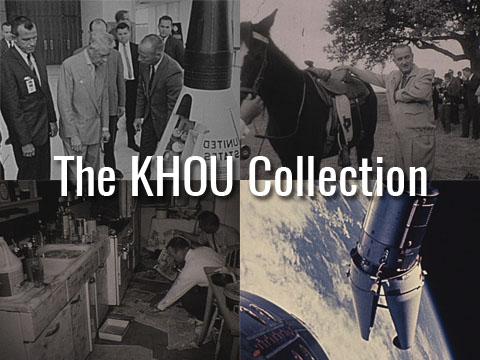 This year, TAMI was thrilled to receive another grant from the Texas State Library and Archives Commission and the US Institute of Museum and Library Services to continue digitization of the Houston Metropolitan Research Center's KHOU-TV Collection. Spanning the 1960s and 1970s, the series of news clips provides a fascinating entry point into Texas history, allowing us to revisit both top news stories as well as forgotten cultural moments.

Politics is a prevalent topic across the collection, with local, state, and federal officials making frequent appearances. This footage of a presidential barbecue at the LBJ Ranch, however, is arguably the most notable of the bunch. On December 27, 1963, President Lyndon B. Johnson hosted some 200 reporters and photographers at his Texas home in anticipation of the official state visit of West German Chancellor Ludwig Erhard. First Lady Lady Bird Johnson gave a guided bus tour of the ranch, while Lyndon Johnson showed White House Press Secretary Pierre Salinger around on horseback. The President's favorite pitmaster, Walter Jetton, catered the meal. This news footage captures the event and many of its activities, including KHOU reporter Nick Gearhart speaking with the First Lady.

Given the time and place, the collection often features news reports related to the NASA space program. A segment from September 1965, for example, captures a press conference with NASA Group 4, the fourth group of astronauts selected by NASA. Another from June 1966 shows operations during the Gemini 9A mission. This footage from October 1965, however, highlights a special visit to the Manned Spacecraft Center by the Duke of Windsor. The former British monarch was in Houston for medical tests at Methodist Hospital, where he underwent major heart surgery the previous December.

Fan of true crime? This footage highlights two of Houston's most notorious murder investigations. One segment shows law enforcement at the scene of a gruesome double murder. Back at the police station, they display items believed to have been used during the crime. The case, commonly known as the Ice Box Murders, remains unsolved. Later, local socialite Candace Mossler comments on the arrest of two men in connection to the murder of her husband, Jacques. Mossler would be indicted herself shortly thereafter. According to the New York Times, the trial of Mossler and her nephew-turned-lover Melvin Lane Powers was so lurid that the judge barred spectators under 21. The pair was acquitted in 1966.

Watch these and other films from the KHOU-TV Collection here, and stay tuned as we continue to add its holdings to the archive.

Many more films from the KHOU-TV Collection are available on the Houston Public Library Houston Area Digital Archives website.