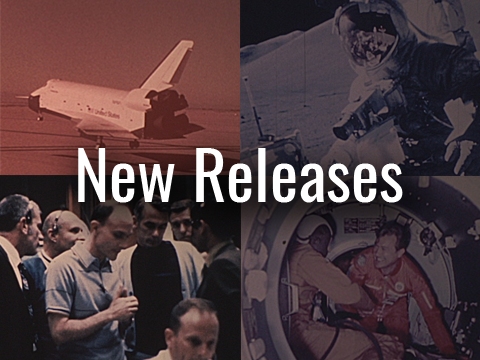 Earlier this year, the Texas Archive of the Moving Image took you on A JOURNEY TO THE MOON THROUGH TEXAS with its award-winning web exhibit. Now, we are thrilled to fly into outer space once more with these new additions from Hardin-Simmons University.  While JOURNEY TO THE MOON culminated with the historic lunar landing, these rarely seen films capture the development of the United States space program from the launch of Apollo 12 to the testing of the Space Shuttle Enterprise.

Apollo 13 launched on April 11, 1970, intending to be the third mission to land on the Moon. 55 hours and 55 minutes into flight, however, an oxygen tank exploded in the Service Module, depleting the crew's oxygen supply and causing multiple fuel cells to fail. NASA soon aborted the original mission, and the safe return and landing of the crew became the primary objective. Produced by the Manned Spacecraft Center (MSC) in Houston, this progress report shows how NASA personnel and the Apollo 13 crew deftly handled the life-threatening incident, with flight controllers and other astronauts offering round-the clock support at the MSC's Mission Control Center.

Apollo 15 was the first of the "J missions," which involved a three-day stay on the surface of the Moon and multiple moonwalks. This silent government film provides an incredible firsthand look at the mission, including the first use of the Lunar Roving Vehicle. After landing on the Moon on July 30, Commander David Scott (a San Antonio native) and Lunar Module Pilot James Irwin took the vehicle for a spin. Join them as they drive across the surface of the Moon!

After the conclusion of the Apollo program in 1972, NASA turned its attention to Skylab—the United States' first space station. This silent government film chronicles the Skylab 2 mission, including footage shot aboard Skylab. Unlike previous spacecraft, the space station offered astronauts exponentially more room to move around. Commander Pete Conrad, Science Pilot Joseph Kerwin, and Pilot Paul Weitz take full advantage of the added space to play around in the zero-gravity conditions.

By the early 1970s, Cold War tensions between the United States and the Soviet Union remained high. In an attempt to improve relations and move toward a policy of détente, the two nations agreed to undertake the first international manned space mission, named the Apollo-Soyuz Test Project. This status report includes coverage of a joint training session at Johnson Space Center in Houston for the astronauts to acquaint themselves with Apollo systems and procedures. To balance the rigorous work schedule, NASA organized a social outing to San Antonio. After touring the Alamo, the cosmonauts don cowboy hats and bandanas for a true Texas barbecue.

Watch these and other films from the Hardin-Simmons University Collection here!