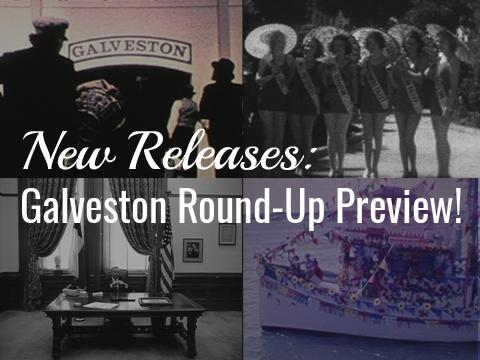 Team TAMI takes the award-winning Texas Film Round-Up to Galveston in just ONE WEEK! To celebrate, we are showing off a few of our best Gulf-Coast finds brought to us by our event partner, the Rosenberg Library. Pack your beach bag—it is time to take a trip to the Oleander City!

One of the best assets of the Rosenberg Library Collection is its array of colorful promotional films, like this one from the 1970s. "Galveston Is the Mood You're In" showcases the many recreational activities available in the city, from the Galveston Island Shrimp Festival to exhibits at the American National Archives. It also features long-gone attractions like the Darrell K Royal Invitational Golf Tournament and Sea-Arama Marineworld.

Galveston is the Mood You're In

The collection also boasts home movies from one of Galveston's most prominent families: the Sealys. This footage, for example, shows the family attending the 1931 Pageant of Pulchritude—the precursor to the Miss Universe pageant and a Galveston tradition from 1920 to 1932. This film is particularly special because it was shot on a rare color film stock called Kodacolor. Accessing the color hidden on the film, however, requires specialized technology that most film laboratories do not possess. TAMI will be accepting donations to help restore the film to its intended state during our free public screening, "What does Waikiki have that Galveston doesn't?," at the Rosenberg Library on Saturday, June 25.

Another prominent Galvestonian takes center stage in this film. Aaron Robert "Babe" Schwartz represented the city in the Texas House of Representatives from 1955 to 1959 and the Texas Senate from 1960 to 1981. As President Pro Tem, he also received the honor of serving as governor for a day. This footage captures Schwartz and his family at the swearing-in ceremony at the State Capitol Building on February 19, 1966.

The Rosenberg Library Collection - Governor for a Day (1966)

Explore the rest of the Rosenberg Library collection here, and stay tuned as we release more gems from the upcoming Galveston Round-Up!