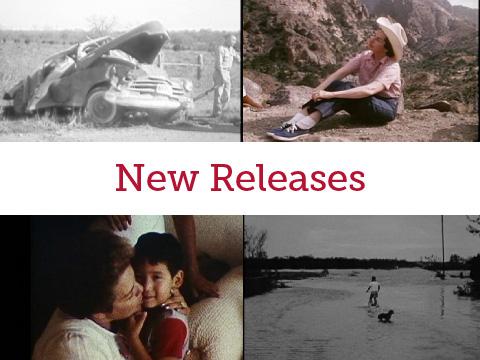 This month's featured new releases come to TAMI via a partnership with St. Edward's University in Austin. Students in Scott Christopherson's Documentary Production class were assigned to create a 3-5 minute film using archival footage from the Texas Archive of the Moving Image collection with an emphasis on creating story arcs. Using four films from TAMI, the students could choose to narrate the clips using a personal story or memory from childhood; explore what it means to be a Texan or living in Texas; interpret the footage using a series of audio interviews that relate to the images; explore what is means to be Latino or Chicano in Texas; or create sound effects, narration, and a story for the images. The films in this collection are the result.

Students took many different approaches and told many different stories through their films. Beth Fly's film, Dreams of a Lady, tells the story of her musician uncle, Sid Fly's, relationship with Lady Bird Johnson after his cousin, Liz Carpenter, took him to the LBJ Ranch. Fly selected images from the archive of Lady Bird and her beloved Texas landscapes and paired them with audio of her uncle describing his introduction and continuing relationship with the former First Lady, for whom he performed for 25 years up until her death. Hunter Rowe took the approach of creating a story inspired by footage in his film, Fatal Car Wreck I. Rowe says he "discovered the images of a fatal car crash from many years ago.  I thought about how many times I've passed a car accident, seen the wreckage, and failed to think about the person who was affected." Rowe then searched for other footage to create a narrative that would "give a voice to the nameless person" from the footage of the fatal wreck. Charlie Sanchez used his film, Smile, Laugh, Cry, to explore his experience growing up with family on both sides of the Texas-Mexico border and getting to know his family in Mexico. Sanchez eventually realized that despite the two societies created by the border, his family in both the U.S. and Mexico share a singular human existence as "people who smile, who laugh, who cry." Also included in the collection are films by Jonathan Lopez, Sharon Bahr, Joey Arcidiacono, and Elizabeth Alvarado-McVey that tell the stories of a murder, a Texas childhood, a Texas identity rediscovered through country music, and a family maintaining their roots in Galveston despite the destructive hurricanes that continually hit the city.

Enjoy this series of creative collaborations, and check back next month for more new releases in the archive!