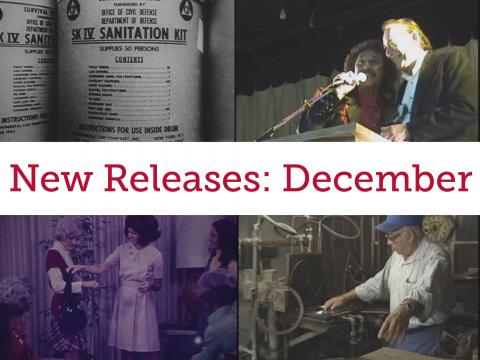 This month's new editions to the Texas Archive of the Moving Image include a broad spectrum of materials—industrial films in the Cinema Bomar Collection, Texas cotton industry films from the Underwood Family Collection, and Tejano community videos from the Conjunto Music Hall of Fame and Museum Collection.

The Cinema Bomar Collection features many industrial and training films from the 1960s, 70s, and 80s, primarily from the petroleum industry in Texas. Highlights include a series of commercials made for the Houston Chronicle in the 60s, each short ad featuring a different section of the newspaper. Be sure to check out "Miss Classified," a position the Chronicle created in 1912 to personify its Classifieds section with a young, attractive lady who was an expert in the Classifieds. Also of interest in the Cinema Bomar Collection is 1960's "The Protected School," a government film profiling United High School in Laredo, Texas. United High School, built at the height of the Atomic Era, was constructed to double as a nuclear bunker for the community and even had a decontamination shower built into the entrance so nuclear fallout could be washed away upon entry!

In the Conjunto Music Hall of Fame and Museum Collection  viewers can learn about Mexican-American roots and the community of South Texas through conjunto music history. Learn how the vinyl record press worked at IDEAL Records, a record label that was integral in establishing the conjunto music community and launched the careers of many notable artists. Also of note is recording artist Freddy Fender introducing his friend and fellow musician, Flaco Jimenez, as Jimenez is inducted into the Conjunto Music Hall of Fame.  The video includes scenes of the two legends on stage together, capturing a significant moment in music history.

Enjoy and check back next month for more new releases from the Texas Archive of the Moving Image!

Houston Chronicle: Get the Jump on Tomorrow - Miss Classified