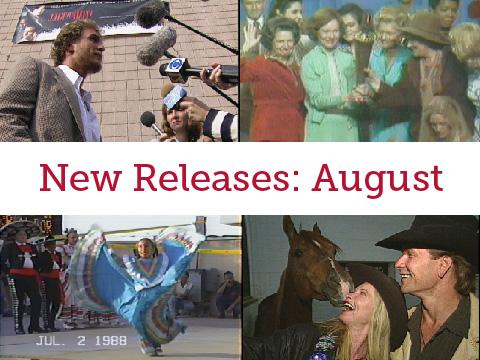 August's New Releases include familiar faces from Hollywood and politics, as well as home movies of Mexican folk dances from El Paso's Herrera and Cruz families!

If you are looking for some history to give context to current events in Texas politics, be sure to watch The National Women's Conference 1977. This television special documents the conference, held in Houston on November 18-21, 1977. Among the speakers and delegates were many Texas leaders, such as Barbara Jordan (the conference's keynote speaker), Liz Carpenter, Lady Bird Johnson, and future Governor Ann Richards at the beginning of her political career, a Travis County Commissioner at the time. Also present, among many others, were Bella Abzug, Rosalynn Carter, Betty Ford, Gloria Steinem, Jean O'Leary, Maxine Waters, and Coretta Scott King. Across town at the Astrodome, the opposition rallied. Footage of opposition leaders Lottie Beth Hobbs, Nellie Gray, Dr. Mildred Jefferson, Phyllis Schlafly, and Bob Dornan is also included in the film. Inspired by this video and last month's footage of Governor Ann Richards' Inauguration Day, TAMI created a new TEKS-compliant lesson plan for the 7th grade classroom that teaches students about notable Texas women, government, and civic engagement.

Other new political additions to the archive include an episode of Longines Chronoscope featuring an interview with Texas Attorney General Price Daniel in 1952. Daniel discusses his ongoing campaign for the U.S. Senate, his battle against organized crime in Texas, and his involvement in the Supreme Court ruling in the Tidelands Controversy. It is interesting to note how little has changed in politics since 1952! Also check out this campaign ad from Will Wilson's unsuccessful run for the U.S. Senate in 1961 that describes Wilson's stand on the Texas Oil Industry and reminds Texans that they have a stake in the U.S. Senate – "let Will Wilson drive it home for you."

New to the Jim Ruddy collection is interview footage from two of TAMI's favorite Texan actors – Matthew McConaughey and Patrick Swayze! In July of 1996, Matthew McConaughey returned to his hometown of Longview, Texas for the premiere of his breakout film - A Time to Kill. In this clip, McConaughey speaks to the press before the premiere about returning to his hometown and his newfound celebrity. Speaking directly to Entertainment Tonight, McConaughey describes organizing the film premiere in Longview along with a high school friend, who is interviewed in this clip. Don't miss interviews with enthusiastic McConaughey fans who voice their personal messages to the star. Also in 1996, Patrick Swayze, a Houston native, hosted a party celebrating the opening of a Planet Hollywood in San Antonio, which included a horseshow, horse training being one of Swayze's passions. Here, Swayze and his wife, Lisa Niemi, talk about the party, actor Tom Arnold's horseback riding skills, and the Swayzes' Egyptian Arabian stallion. Watch party attendees participate in armadillo racing and interviews from the red carpet with actors Charlie Sheen, Bruce Willis, and Chuck Norris. Also be sure to catch footage of Patrick Swayze in the arena showing his horse, Tammen.

Home movies this month come from El Paso's Herrera and Cruz families. Watch this picturesque home movie of the Cruzes riding mopeds and go-karts in their El Paso neighborhood and then showing off their Mexican folk dance and lasso skills at a party. Herrera children Laura and Ale were extensively involved with TAMI All-Star Rosa Guerrero's Ballet Folklorico of El Paso, and their collection includes many videos of Mexican folk dance performances. Of particular interest are this video of a house party with a mariachi band and dance performance, performances at a festival at El Paso's Civic Center, and a Ballet Folklorico Christmas recital.

Be sure to help TAMI identify the many Texas movers-and-shakers in July's Mystery Video, and check back next month for more new additions to the archive!

The Cruz Family Collection, no. 5 - Mopeds and Go-Karts

The Cruz Family Collection, no. 4 - Lassoing and Dancing