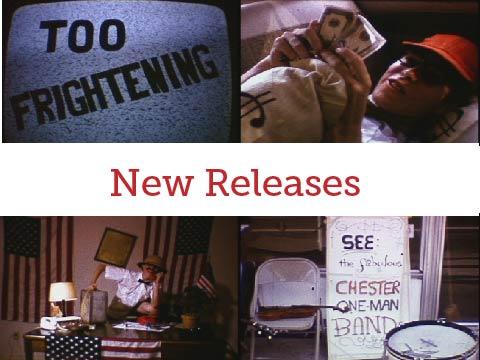 This month's new releases from the Texas Archive of the Moving Image feature the amateur film Too Frightening! The film comes from donor Robert Frye, who made the film as a young adult. It is a clever piece of slapstick cinema that follows the misadventures of Chester, a young man who is desperate to get ahead, but is continually and comically thwarted by circumstance and the cruelty of other people. Chester's odyssey begins with his mother telling him he must get a job, and throughout this quest, we watch Chester dazzle a street gang with his coin-flipping prowess, taken hostage by bank robbers, perform as a one man band, blown up by a stick of lit dynamite, sell copies of the news weekly "Grit," forced to eat his copies of "Grit" by a gang of hipsters (with mustard), and finally, mistaken for a presidential candidate before being elected President of the United States. The story ends when the paparazzi overwhelm President Chester in his home with his family, and he finds himself back where he started – flipping coins on the corner with a street gang. Filmed in Dallas, Too Frightening is in two parts (Part One and Part Two) and is a true delight to watch!

Too Frightening (Part I)