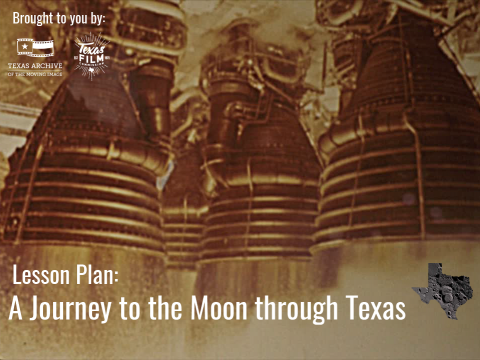 New Lesson Plan: A Journey to the Moon Through Texas

In the 1950s and 1960s in the United States, national support and funding for space programs and technological research expanded as the international political climate following World War II gave way to the Cold War.  Often referred to as the "Space Race," the competition between the United States and the Soviet Union for supremacy in spaceflight and aerospace technology led to the rapid development of space programs in both countries. Huge advancements were made in a relatively short period of time as both countries scrambled to develop superior technologies for both manned and unmanned exploration beyond the surface of the Earth. In the United States, the national effort led to a mission landing the first men on the moon just over a decade after the country's first satellite was launched.

These rapid developments were the result of a concerted effort of scientists, engineers, and researchers across the country, but Texas proved a significant location for the space program. At the Manned Spacecraft Center in Clear Lake, Texas (now the Johnson Space Center), thousands of employees worked to test equipment, train astronauts, and develop communication systems that would allow workers at Mission Control to speak to spacecraft beyond the Earth's atmosphere. Additionally, although the launches of space missions took place at Cape Kennedy in Florida, the Manned Spacecraft Center became the visible front of the space program in the US, broadcasting video updates of program and mission developments.

This lesson explores this unique period of growth in the U.S. space program focusing on the role of the Manned Spacecraft Center and the contributions of workers at the Texas site. Using films produced by NASA and staff at the Manned Spacecraft Center, as well as home movies and other promotional films, students will gain a greater understanding of the developments within the space program and the short timeline and rapid progress that was made. This lesson corresponds with TAMI's web exhibit, A Journey to the Moon through Texas.