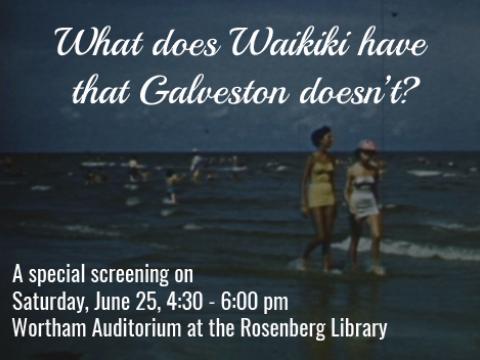 What does Waikiki have that Galveston doesn't?

TAMI is so excited to take our Texas Film Round-Up to Galveston June 23 - 25! To quote one of TAMI's favorite films, Texas - the Big State:

Clean, inviting sands caressed by blue waters offer an invitation almost impossible to resist. Certainly these folks seem to find it fun. These fine beaches are but one of the many features that makes life in Galveston desirable as a place to live and work. What does Waikiki have that Galveston doesn't?

To illustrate this sentiment, TAMI will host a free public screening, "What does Waikiki have that Galveston doesn't?," on Saturday, June 25 from 4:30 – 6:00 pm in the Rosenberg Library's Wortham Auditorium.

Come down to help us raise funds to restore an early and rare film of the 1931 Pageant of Pulchritude from the Rosenberg Library's collection to full color, a new digital technique that has only recently been developed. Help us restore this treasure, never before seen in color, to its intended state! The screening will feature many films from the Rosenberg Library, including fun, mid-century tourism films, an interview with filmmaker King Vidor about the 1900 storm, and footage of the 1925 Galveston Bathing Girl Revue transferred from 35mm nitrate film.  See historic home movie footage of the Oleander City's beaches, landmarks, pageants, and festivals dating back to the 1920s!

This is a free event, but we will be gratefully accepting donations on site. If you can't make it to the event, but would still like to donate to help restore the film, you can do so on our Contribute page.

We hope to see you there!

A still from the 1931 Pageant of Pulchritude film we hope to restore.