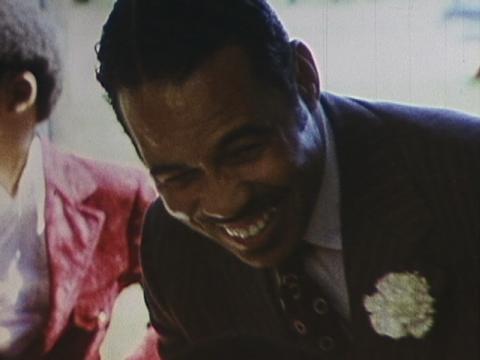 Sitting Down With a Legend

I have been in the presence of true greatness exactly one time.  In September of 2012, I spent a weekend getting to know Dr. Thomas F. Freeman, whose home movies TAMI now proudly features in its collection. On Sunday morning, I went to Mt. Horem Baptist Church in Houston's Fifth Ward to see Dr. Freeman deliver a sermon to his congregation. At 93, Freeman remains a riveting and energetic speaker, which should come as no surprise as Dr. Freeman has served as Texas Southern University's Debate Coach for nearly 64 years. The next day, I visited Dr. Freeman in his office, where we watched and discussed his home movie collection. Having already watched over 100 of his home movies, I held high expectations, but the experience itself proved even more powerful. As I walked into the suite of rooms used for the debate team at TSU, I was greeted by hallways lined floor-to-ceiling with photographs of the team over the years, portraits of Dr. Freeman and his family, certificates, trophies, ribbons, and other various awards. It was like a jam-packed museum, literally bursting at the seams with achievement.   As I listened to Dr. Freeman (his stories, his diction and cadence), I was further impressed by the gravity of his work and life, sitting, literally, on the edge of my seat to hear his history.

Dr. Freeman came to Texas Southern University, one of the state's leading historically black colleges, in 1949 on what he called a "nine month contract experiment  . . . to decide for [him]self whether or not a person trained in religion could be effective on a state college campus, understanding the separation of church and state."  Teaching in the Philosophy Department, he assigned students in his logic class to conduct a debate – a decision that would change the course of history in Houston and Texas' African-American community. Although Freeman intended to return to his hometown of Richmond, Virginia after his short contract at Texas Southern expired, he agreed to serve as TSU's debate coach for the remaining months of his time there. When the debate team won its first two debates, the administration at TSU successfully campaigned for Dr. Freeman to remain with them in Texas.  The way he came to minister at Mt. Horem Baptist Church is a similar story; he agreed to deliver a guest sermon, and 63 years later, Dr. Freeman still preaches there every Sunday. Listen to Dr. Freeman talk about how he came to Mt. Horem over scenes of his 22nd Anniversary party at the church.

Freeman has shaped the lives of many, if not all, of those he has taught. He invigorates those around him, encouraging and then rewarding excellence, achievement, and active participation in community life.  At TSU, Freeman was the Founding Dean of both the Weekend College and the Honors College. The Weekend College was conceived by TSU President Granville M. Sawyer, who held a vision of TSU as an "urban university serving the peoples' needs," particularly access to higher education for those holding a full-time job. Freeman worked with Sawyer to develop the program, which soon rivaled the numbers of TSU's general enrollment. The Honors College, now named the Thomas F. Freeman Honors College, was created for students with a GPA of 3.75 or above to provide them with "the quality of education commensurate with their excellence and achievement." Dr. Freeman also brought the Model Cities program, a federal program of the 1960s designed to build communities, to Houston. Through Model Cities, Freeman taught classes in leadership to Houston citizens on the TSU campus, exposing them to lectures and examples of citizen participation. Freeman's home movie collection includes several of him visiting Model Cities offices throughout the United States, as well as the Housing and Urban Development Office in Washington D.C. Listen to Dr. Freeman talk about his experience with Weekend College, Honors College, and Model Cities over scenes of Weekend College.

As Freeman's home movies were filmed from 1968-1976, a period of American history dominated by race relations and conflict, I would be remiss to not mention this aspect of his films, as well as the many other African-American leaders with whom Freeman worked. In his home movies, I noticed that Dr. Freeman's children play in the front yard with white children and that Freeman performed at least one interracial marriage. When I asked about these films, he told me that his children integrated while in elementary school, two of his three children being the first black students at their schools. Professionally, Freeman also broke ground. Twenty-three years into his career at TSU, while serving as a dean, Freeman was approached to begin teaching at Rice University. Only a few years after Rice desegregated and was virtually still a whites-only school, Dr. Freeman began a 20 year career there, the first African-American professor, to the best of Freeman's memory. Listen to Dr. Freeman talk about how he came to teach at Rice and his making university founder William Marsh Rice "turn over in his grave" over scenes of Freeman's first day on campus.

The list of students he influenced also includes some major figures in African-American history. Among those is Dr. Otis H. King, a debate team member who went on to become a civil rights activist, Harvard graduate, Dean of TSU's Thurgood Marshall School of Law, and Houston's first black City Attorney. While guest lecturing at Atlanta's Morehouse College, Freeman taught a young Martin Luther King, Jr. in the days before King rose to prominence. Listen to Dr. Freeman tell the story of teaching and later reconnecting with MLK. Perhaps most importantly, Dr. Freeman taught and maintained a close friendship with Texas Congresswoman Barbara Jordan, who was the first African-American elected to the Texas Senate and the first southern black female elected to the United States House of Representatives. Freeman met Jordan when she was still in high school, and she pursued an education at TSU, "seeking out the debate coach," and was a member of the team for four years. Jordan was the first woman to travel with Dr. Freeman's debate team, and she and Otis King, as debate partners, integrated tournaments in the South and consistently swept competitions. Jordan and Freeman remained close until her death; Dr. Freeman delivered her eulogy. Listen to those stories over footage of Jordan receiving her honorary doctorate from TSU in 1975, and be sure to view the transcript of Jordan's speech from the ceremony.

TAMI is proud to host the Thomas F. Freeman Collection. In addition to films from his career as a professor and minister, many films feature the Freeman family, including Dr. Freeman's wife, Clarice Estell, whom he married in 1953, and his three children: Thomas Jr., Carlotta, and Carter. Please enjoy this 93-video collection, and check back at the end of this month to learn more about other projects involving Dr. Thomas F. Freeman.

Dr. Freeman Reflects on His Relationship with Barbara Jordan

Dr. Freeman Reflects on His Time at Rice University

Dr. Freeman Reflects on His Relationship with MLK