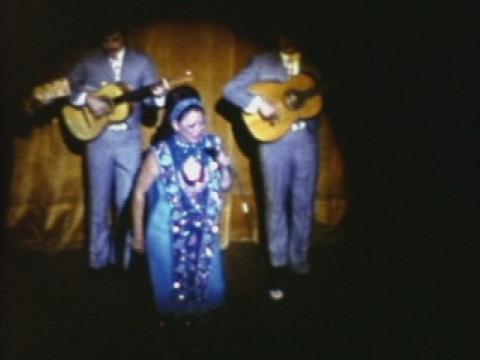 On the eve of Home Movie Day, City of Dallas Archivist (and organizer of Dallas' Home Movie Day) John Slate reflects on one of his favorite home movies from the Texas Archive of the Moving Image:

"The ‘Variety Show at the Alameda Theater' reel from the Ramon Galindo Collection is an important document of the latter stages of a long theatrical tradition in San Antonio. Not unlike the neighborhood tent shows and circus acts (Las Carpas), the Spanish-language variety show in San Antonio dates back to the 1920s, when this programming was featuring in smaller clubs and later migrated to larger stages such as the Alameda, which opened in 1949. More than just a theater, the Alameda is connected to the rise of Spanish-language radio and television broadcasting. Before its own headquarters was built, Raul Cortez' stations KCOR radio (1946) and later television (1955), which can be the considered the direct ancestors of today's Univision, broadcast from the Alameda. When you are viewing these clips of variety acts, think of the long history of theater and performance in San Antonio, as well as the dream of Raul Cortez to create an entertainment empire made by and for Spanish speaking audiences."

See your home movies on the big screen tomorrow at Home Movie Day at the Texas Theatre in Dallas at 4p or at the Austin History Center in Austin at 2p.