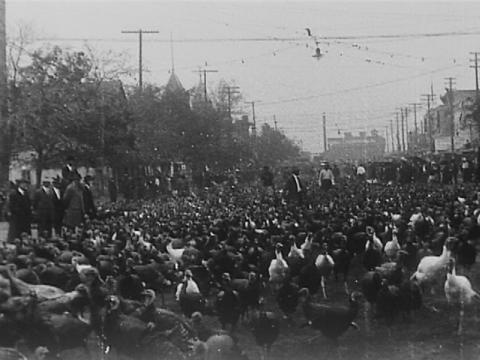 In celebration of Thanksgiving and the launch of The Sloane Collection, Filmmaker and Cuero Turkeyfest Board Member Erik McCowan reflects on one of his favorite films from the Texas Archive of the Moving Image:

"When I first arrived in Cuero and began researching the old Turkey Trot festival, I was amazed by the amount of history that was archived. Photos and news articles filled the walls of the Cuero Heritage Museum. From the front page of the Cuero Daily Record on November 27, 1912 was a column heralding the massive press reports coming from town, one of which was a motion picture company rolling film for the news updates that showed before the picture shows in movie theaters. For years, the earliest known footage of a Turkey Trot parade was from 1947. Then, the Texas Archive of the Moving Image contacted me about some old black and white footage from an early Turkey Trot, thought to be from the 1920s. Upon my first examination of the film, I knew that this was something special. Dirt streets, men in suits and old automobiles convinced me that this was from a time in Cuero much further back than I had previously seen. Then, the wagon passed with the single banner attached noting 'Isaac Egg Son's 8115 Turkeys, The Largest Interior Buyers of Turkeys in the World, and I got goosebumps. Was this one of the 'Holy Grails' of Cuero footage I had been searching for? Further research brought me back to that 1912 Cuero Daily Record article which described the parade in the order as it happened outside their window as they saw it on Main Street, and just how it unfolded on that computer screen in the TAMI office that wonderful day. Now, Cuero Mayor Henry Mugge, Texas Governor Oscar Colquitt and the largest display of turkeys in the world had their due moment on the screen again, 100 years after they all strutted so proudly for the motion picture man."

Happy Thanksgiving!  Enjoy additional films of the Cuero Turkey Trot by viewing the below related films.

At the Cuero Tukey Trot