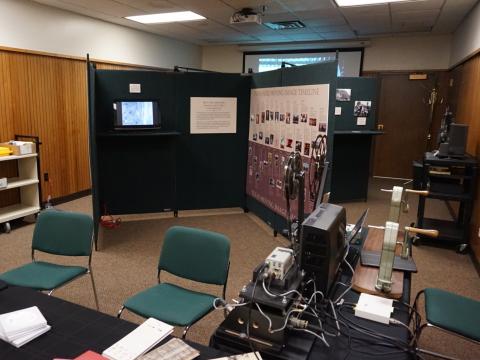 
TAMI traveled to Amarillo for the Texas Film Round-Up in June, and we fell in love with the Panhandle! We took in a record-breaking 1,000 films and videos for our free digitization program from the community at the Downtown Public Library, where we were able to meet some great people from the area and hear many stories about their community. We also held a fantastic screening at the Tascosa Drive-In Theater, thanks to owner Rhett Butler Burns, where we showed historic film footage of the Panhandle. We topped off our trip with a tour of the historic Herring Hotel, where preservationists are trying to raise money and awareness to restore this beautiful icon. It is not a moving image, but we love history in all forms, and sunset on the roof was breathtaking! Thank you to everyone in Amarillo that made this event such a success. We are busily working to digitize the media collected and look forward to sharing some of it soon!

TAMI got a lot of great press in June surrounding the Texas Film Round-Up in Amarillo, which contributed to the big turnout. The  Texas Ranger Hall of Fame and Museum Newsletter  featured our lesson plan Mexican-American Heritage: Texas Experiences, and our friends over at  Slackerwood  wrote an article about the eclectic Roy Faires' collection as part of their TAMI Flashbackseries.

For the first time in TAMI history, our  June Mystery Video  featuring  Woody Woodard's Ranch-O-Twirl  was the most viewed video of the month! A big thank you goes out to the Houston Chronicle, who featured the video on their website.  Here are the top 5 most viewed videos in June:

The FWPD Collection - Fort Worth Flood of 1949