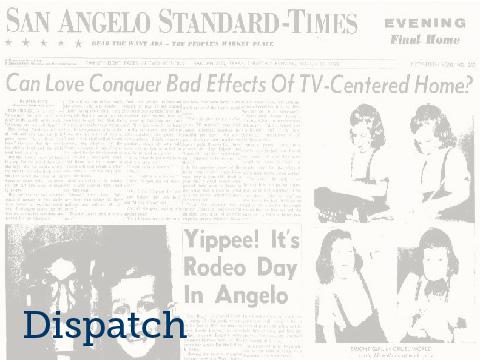 TAMI rang in the holidays with a fun home movie reel celebrating the season. If you haven't watched yet, check it out, and let TAMI wish you a happy holiday!

TAMI was featured in several places around the web last month:

-Slate featured a TAMI film in its blog article, "A Terrifying Holiday Warning From 1962."

- The Texas State Library and Archives Commission selected a TAMI film still for their "Picture Texas" project and featured it on their Facebook page. The picture and the film portray Uncle Jeff Hamilton, Sam Houston's former slave and trusted personal servant.

-San Angelo Live reported on the upcoming Texas Film Round-Up and TAMI's participation in the History Harvest in this article.

-The Salisbury Post wrote a feature on the filming of Melton Barker's The Kidnappers Foil in Salisbury, North Carolina in 1941. The article discusses TAMI's work to preserve Melton Barker's films, as well as an interview with Barbara Earley, a woman who was in the film as a child and is a friend to TAMI.

The top five videos in the Archive last month were:

Happy Holidays from the Texas Archive of the Moving Image