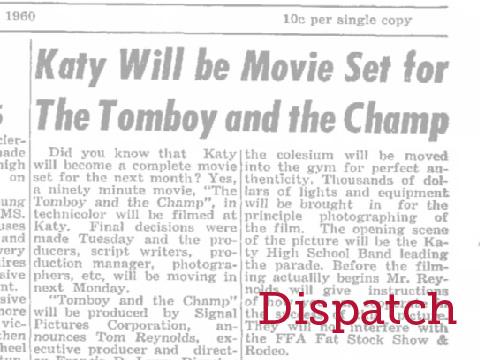 In August, TAMI took our Education Program to the "Connect It! Linking Schools to Community Partnerships" conference at James Bowie High School in Austin just in time for the beginning of the school year. Caitlin McColl, TAMI Education Specialist, presented to principals and administrators about classroom resources available to educators through the  education portion of the TAMI website. We had a great time talking to the folks from AISD and are excited for more teachers to use our educational resources this year!

Flicker Alley  featured an interview with TAMI Executive Director and founder, Caroline Frick, this month. Ms. Frick discussed the life and work of the beloved itinerant filmmaker, Melton Barker, who spent his life traveling the United States, making the same movie more than 200 times with a changing cast of local children.  Read her interview here .

"She's the pig-tailed pride of the Texas plains!" claimed Universal Studios when "Tomboy and the Champ" premiered in Houston in 1961. An intriguing piece of Hollywood history, this film was produced in honor of 4-H clubs across the country and exemplifies what some critics describe as the popular "country musical" genre from this period. Shot in Katy, Houston, and Chicago, the film's producers dedicated it to "the heart of America."  This newsreel  was the most viewed video in August, see what other videos made the top five: