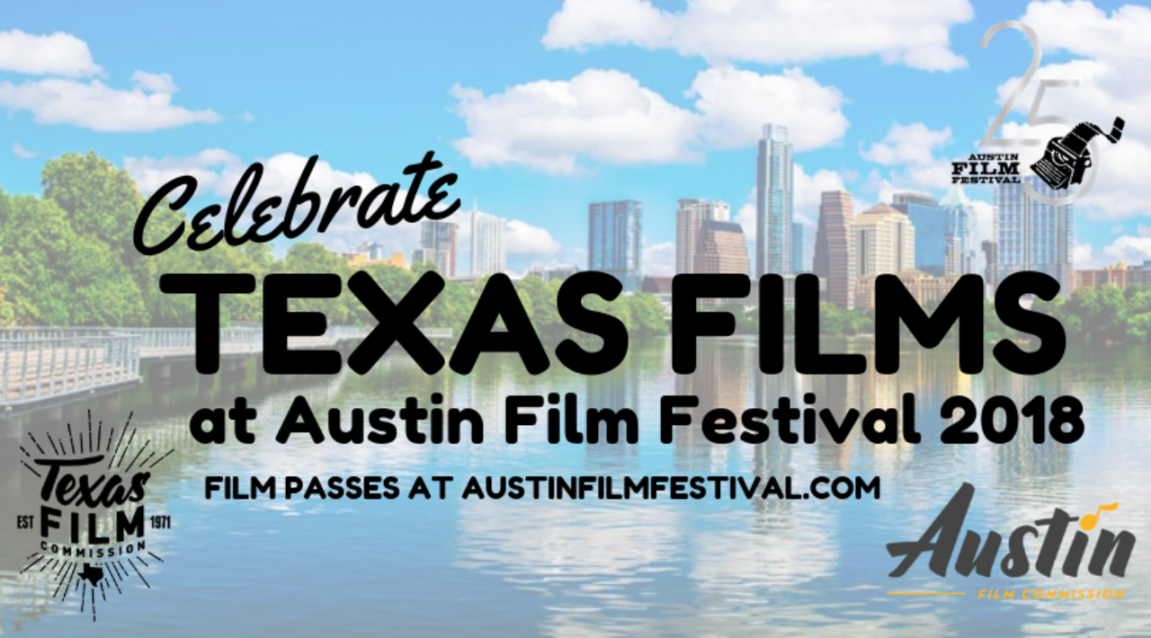 This year's Austin Film Festival is jam-packed with too many great films to watch, but if you love the Lone Star State and want to show it some love, here are some films at AFF this year you shouldn't miss! Texas Archive of the Moving Image shared some of their treasures which will show prior to each feature in the Texas independents category!

Buy your Film Pass or Badge here and join us at AFF 2018!

Enter TAMIFP for $10 off a Film Pass

From Tobe Hooper's first film Eggshells, to classic films from Richard Linklater and Robert Rodriguez, to underground rarities and star-driven Hollywood fare, locally shot films provide a rare ongoing time capsule of one of the fastest growing cities in the US These films document not only changes in Austin's landscape, but also its unique, enduring culture. Also Starring Austin weaves together scenes from nearly 50 years of local films with commentary from some of Austin's well-known producers, directors, and industry leaders to examine a community's history through the cinema lens.

Set in the oil fields of Texas, The Iron Orchard is a vibrant, brutal story of the men who labored, lusted and gambled their money in search of a prize few were lucky enough to find. Told from the inside by a man who knew the oil fields intimately, the story is an authentic account of how the roustabouts lived, loved and attempted to prosper in one of America's most dramatic industries.

In partnership with aGLIFF

Jules of Light and Dark

Set against the backdrop of a vibrant Texas Rave Culture, two young lovers, Maya and Jules, are found wrecked on the side of the road after a party by a loner roughneck, Freddy. During the rehabilitation, their relationship falls apart. Maya rebounds by rethinking her life and forms an unlikely friendship with Freddy, whose past mistakes and experiences offer her insights on her next steps.

After two state championships and a 25 game winning streak, the Wagoner High School Bulldogs are going for a third consecutive title under the leadership of their coach, Dale Condict. "Coach" is more than just your typical guy shouting out plays and holding a clipboard; he's a mentor and confidant to the young men on his team. His s own son and the team's starting guard is recovering from testicular cancer and trying to make a comeback on the field. In a small town where high school football is not only the brightest stage, but also the best ticket out, Coach must help his players survive the year and avoid the same pitfalls as previous generations.

An aging lawman is convinced a mysterious stranger in his small town is innocent. His investigation stirs up a hornet's nest. Details aren't adding up and it's not clear who to trust. The truth will change the town forever.

Waiting for the Miracle to Come

An aspiring trapeze artist discovers a cryptic letter her recently deceased father once wrote, directing her to a gold mine in a remote California desert. Upon arriving in a mysterious town, she finds herself at the gates of "The Beautiful Place," a house occupied by retired vaudeville stars Jimmy and Dixie Riggs. As she gets to know the eccentric couple, she discovers her father's words were directing her to a reward far more valuable than gold.

Frame of Mind: Remixing the News

Free and open to the public!
Producer:  Bart Weiss

Since 1949, WFAA Chanel 8, in Dallas has documented the news of the day. For years, the station shot that news on 16mm film. WFAA donated all of this raw footage from 1960 to 1977 to the Bill Jones Collection at SMU. Archivists there transferred it and gave it—all 1.3 terabits of it—to 10 Dallas filmmakers. Their challenge was to explore the images that spoke to them, and use them to create original works. Think of these pieces like video remixes, or mashups of a cities reflections. They are constructs of imagination, social and political commentary, not factual documentary. Giving these historic images new contexts and new meanings may give us fresh ways to look at the past. And reveal something about who we are today.

For years, Ollie (Tessa Thompson) has helped the struggling residents of Little Woods, North Dakota, gain access to Canadian healthcare: smuggling in their medications, sneaking people across the border for procedures and profiting from drug trafficking on the side. After she's caught and put on probation, she plans to go legitimate but is driven back into the underbelly of their oil boomtown by her sister, Deb (Lily James).

Atlantic City  (USA, 15 min)
Writer/Director: Miguel Alvarez
A drifter sets off to find his estranged mother but finds a new mission when he meets a teenage runaway who needs his help.

By Dan Jenkins  (USA, 20 min)
Directors: Kelly Lipscomb, Matt Tisdale
After a life filled with covering the most prestigious tournaments in the world,  renowned golf and football expert Dan Jenkins sheds further light on his beginnings and how the two sports have shaped his life.

Muerte  (USA, 13 min)
Writer/director: Harold Fisch
On the night he seeks to dive head first into his work, an artist discovers hidden secrets of his lineage and begins to learn his true purpose.

Lovers At Night  (USA, 5 min)
Writer/director: Alexander M. Rosales
A man awaits his date, but is met with something else.

Tightly Wound  (USA, 10 min)
Writer/director: Shelby Hadden
A woman recounts her experience living with chronic pelvic pain and how health professionals have failed her, men have rejected her, and complex emotions have plagued her body.

Tempestad  (USA, 16 min)
Writer/director: Daniel E. Garcia
It's opening day of The Tempest at Alex's prestigious high school, but he and his brother must first accomplish a colossal tree service project to keep the family business alive.

Nobody Knows  (USA, 20 min)
Writer/Director: Nolan Wilson Goff
In the wake of his brother's death, a quiet high school student navigates his small Texas town, all while knowing he is responsible for the accident.

My Friend Shokat  (USA, 12 min)
Writer/Director: Bita Ghassemi
All a young boy wants to do is save his family's goat, but between his sister's desires and their family's financial troubles, Shokat may have to go.

A Lucky Man  (USA, 24 min)
Directors: Jared Moossy, Shaul Shwarz, Christina Clusiau
Following a decade and a half of dodging bullets in war zones, a death-defying photojournalist faces his greatest hardship: losing his memory and his life as he knew it.

Personal Trainer  (USA, 10min)
Writer/Director: Alex Shultz
A young college student takes an eventful trip to the gym and finds himself exposed in more ways than one.

Clean Break  (USA, 12 min)
Writer/Director: Isaac Burns
Nancy goes to her friend to take her mind off a breakup, but his romantic overtures endanger their friendship.

Pepito  (USA, 15 min)
Writer: Isaac Garza
Director: Eman Esfandi
While being lovingly coerced by his mom to go to confession, Pepito is infantilized to the point of suffocation in this bilingual comedy.